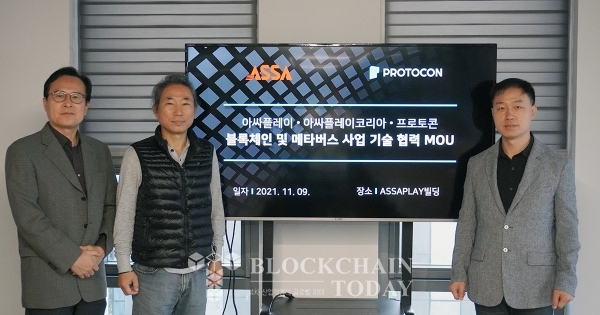 [Blockchain Today Correspondent Han Ji-hye] ‘ASSA’, a brand well known for ‘Magic Thing Assa karaoke’, announced on the 10th that it will enter the ‘blockchain and metaverse business’ in partnership with Korea’s native mainnet Protocon. .

Kyung-ho Lee, chairman of ASSAPLAY, a music-themed entertainment service, said, “Asa, which has been reborn as an O2O convergence brand thanks to the wave of Hallyu sweeping the world, is a golden opportunity to advance into the global entertainment market by combining blockchain and metaverse. think as We will preoccupy the global market with Protocon, which has excellent technology.”

ASSA is already a karaoke franchise business 10 years ago, breaking away from the hardware manufacturing business structure of supplying sound/devices, and is a Magic Thing karaoke application linked to a one-person Bluetooth microphone. It is the undisputed world best brand that has been transformed into a business structure.

Chairman Lee Kyung-ho said, “Now is the time to go a step further and think about the future food and music industry, not just the memories of past success.” It is an issue, but we decided that blockchain technology is essential to guarantee digital assets and rights in Metaverse, and it is difficult to stay ahead of the times or expect effective business without source technology. said

In order to fulfill these ambitions, Chairman Lee has already established ASSAPLAY PTE, which will serve as a platform to converge and link the business models of affiliates such as Enter Media, Asa, Golflex, and Encore Fit. . LTD) was established in Singapore, and all preparations were made to establish Asa Play Korea Co., Ltd. in Korea for operation and development. In addition, Myeong-chan Son, who has successfully incubated and grown several famous brands as the CEO of Asa Play Korea, was appointed as the CEO. CEO Sohn said, “I am delighted to be part of targeting the global market based on Korea’s outstanding cultural capabilities and technology. I will do my best to help.”

Protocon has dramatically improved blockchain performance and safety with its proprietary technology, and is widely known as the mainnet that solved the fee problem, which was pointed out as a chronic problem of blockchain. Protocon is also developing ‘Block City’, a metaverse game using Minecraft, and is applying blockchain technology necessary for metaverse such as NFT and real estate transactions. In addition, DID technology has already been developed, and the basic technologies necessary to build Metaverse’s economic system have been integrated and secured. Myungsan Jeon, leader of Protocon, said, “At the time when Metaverse and blockchain started to be combined in earnest, we are happy to enter the global market together with a cultural content company with 7 million users around the world. We will pour in our support to grow into a global service,” he said.

The industry is paying attention to whether the karaoke play culture made in Korea can further accelerate the hot Korean wave based on the block chain technology created by domestic technicians.