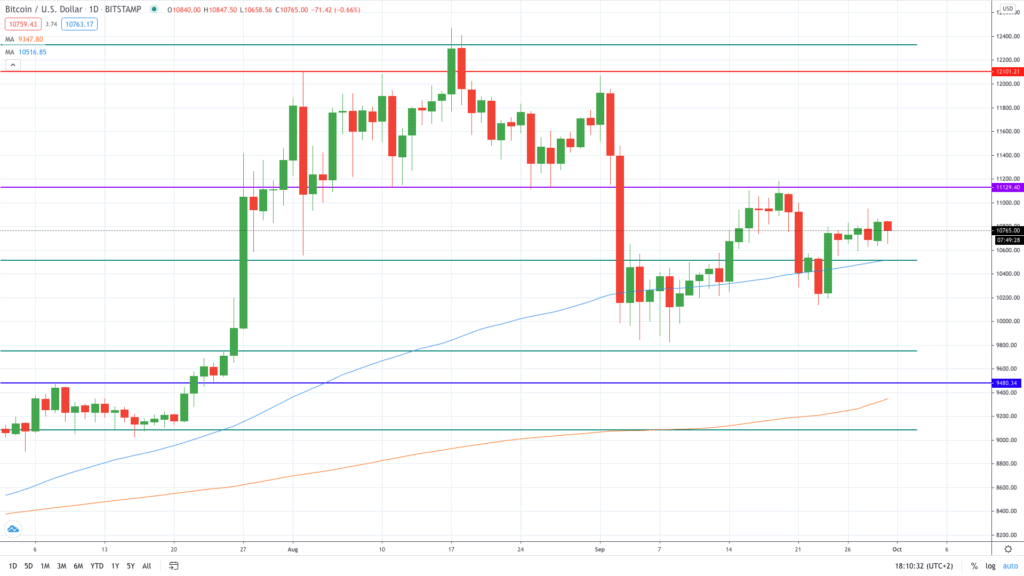 Bitcoin (BTC) price is trading sideways but still above the 200-DMA at $10,500. The long-term prospect for Bitcoin’s mass adoption may be accelerated by social media, according to Jack Dorsey, co-founder and CEO of Twitter.

Fundamental analysis: Social media platforms will be shaped by Bitcoin and crypto – Dorsey

Dorsey said the future of the social media platform will be moulded by Bitcoin and its technology. Dorsey has once again voiced his support for a decentralized social media standard at a virtual conference on September 25.

“A lot of our value in the past was around content hosting. So we would host the tweets, the images, and videos,” Dorsey said at the virtual Oslo Freedom Forum 2020.

“Blockchain and bitcoin point to a future, and point to a world, where content exists forever, where it’s permanent, where it doesn’t go away, where it exists forever on every single node that’s connected to it,” he told Thor Halvorssentold, the Human Rights Foundation president.

Dorsey has formed a team named BlueSky and expects to hire five engineers “and some folks” to develop Twitter as an open protocol, similar to that which email is based on and will attempt to come up with an alternative to traditional, centralized social media networks.

“Right now we’re in the phase of finding a leader for it, but this is a completely separate non-profit from the company,” he said. “This group will be tasked with building a protocol that we can use and everyone else can use.”

This can be seen in Bitcoin and blockchain, Dorsey said. Individuals will gain more and more control over the keys, he added.

Bitcoin price is trading nearly unchanged on the week after the bulls managed to gain 1.37% yesterday and therefore erase Monday’s losses. This way, the world’s largest digital asset is trapped between $10,500 and $11,100.

Any pullback to the former level will provide a buying opportunity for BTC investors. On the other hand, the horizontal resistance line (the purple line) at $11,100 will continue to act as daily resistance.

Jack Dorsey has once again endorsed the decentralized social media standard and said Twitter’s future will be shaped by Bitcoin. The world’s largest cryptocurrency is trading mostly sideways this week.