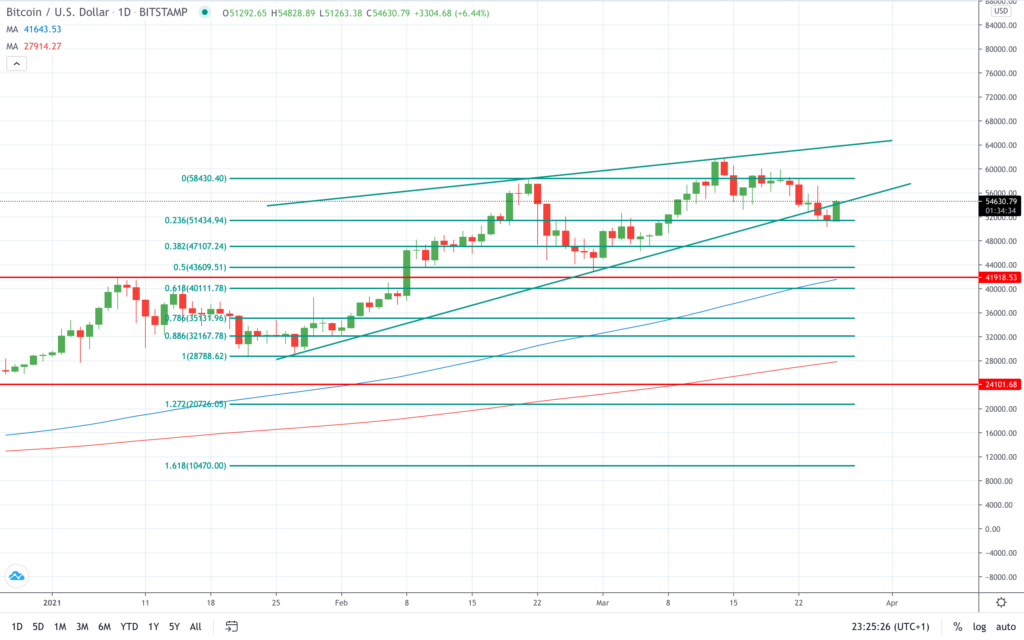 Bitcoin (BTC) price has rallied nearly 7% today to return to trade around the $55,000 handle.

Fidelity Investments is gearing up for the launch of its own Bitcoin exchange-traded fund as a part of the company’s drive to grow its digital asset business. Fidelity’s branch FD Funds Management announced Wednesday its support for the ETF Wise Origin Bitcoin Trust.

The subsidiary filed a Form S-1 with the Securities and Exchange Commission, which serves as a preliminary registration statement for the fund. If the SEC approves the ETF, the fund will monitor Bitcoin’s performance as measured by the movement of the Fidelity Bitcoin Index, Fidelity’s gauge for tracking the cryptocurrency’s price.

Until now, the SEC has not allowed any company to create a Bitcoin ETF, claiming that the market was not ready even though the number of applications continues to increase. Last week, the agency acknowledged a Bitcoin ETF filing from VanEck.

While Fidelity’s fund does not plan on selling the cryptocurrency, it will use Bitcoin to pay for some expenses, which will be treated as a sale of digital currency under IRS guidance. However, the launch of a Bitcoin ETF is not the first time Fidelity started a venture to increase its reach in the world of digital assets.

Back in 2018, Fidelity launched a subsidiary called Fidelity Digital Assets which serves to deploy its digital currency custody and trade execution operations. This helped attract various types of clients including institutional investors and family offices, among others.

Technical analysis: Bulls are back

Today’s performance in Bitcoin price action suggests that bulls are back. A strong healthy daily candle of nearly 7% of gains is likely to accelerate Bitcoin’s trip to new fresh highs above $61,700.

Despite the fact that the price action broke below the ascending trend line near $53,000, this now looks like a failed breakout that may reverse the short-term trend and offer a chance for investors looking to buy Bitcoin. In the coming weeks, the two next targets for the buyers are $64,400 and $68,200.

Fidelity is preparing to launch its own Bitcoin ETF in a bid to expand its reach in the world of digital currencies. In the meantime, BTC price has rallied strongly today to return to the area around $55,000.