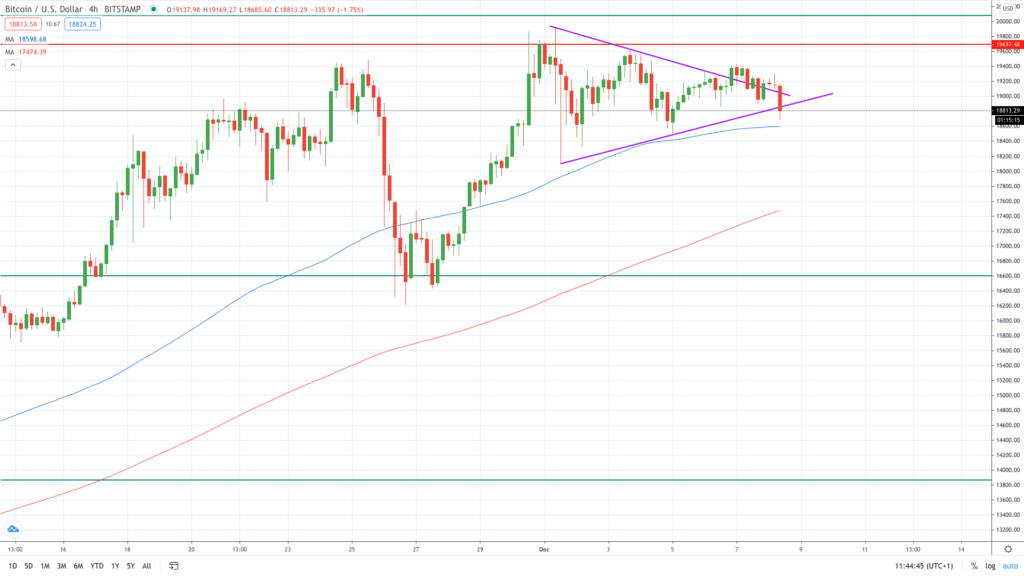 Bitcoin (BTC) price has dipped to trade below $19,000 as Facebook’s top executive says its rebranded cryptocurrency project will be launched next year.

David Marcus, the head of Facebook Financial, said that he hopes to have both Diem and Novi launched over the course of the next year.

“I hope that we get to participate with … Novi and Diem and the big changes of 2021, pending regulatory approvals where we need to obtain them,” Marcus said at the Singapore FinTech Festival.

Facebook made efforts this year to rebrand its much-scrutinized cryptocurrency project, initially called Libra Association. It first changed the name of its wallet from Calibra to Novi, while it announced last week that Libra Association will now be called Diem.

“We are committed to doing so in a way that promotes financial inclusion – expanding access to those who need it most, and simultaneously protecting the integrity of the financial system by deterring and detecting illicit conduct. We are excited to introduce Diem – a new name that signals the project’s growing maturity and independence.”

The rebranded project will hope to win the trust of the regulators and lawmakers.

After it moved to print the highest levels ever recorded last week, Bitcoin price has moved lower in the past two days to trade below the $19,000 mark, most likely on profit-taking activity from early Bitcoin buyers.

The price action is now consolidating within a symmetrical triangle chart pattern. However, the buyers failed to sustain an earlier break out of this triangle to provide sellers with a chance for the reversal.

A daily close below $18,400 is likely to accelerate the short-term bearish sentiment and push BTC towards the next intraday support line at $17,600.

Bitcoin price has rotated lower to trade below the $19,000 mark. In the meantime, Facebook’s top executive says that the rebranded crypto project is likely to make a public debut next year.