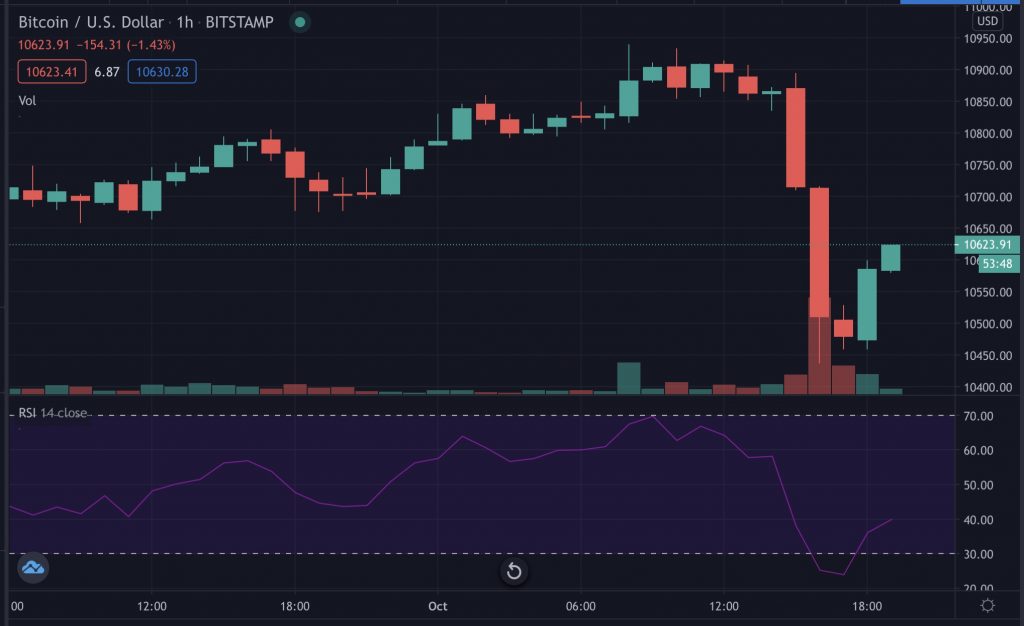 The premier cryptocurrency was trading near $10,612 at the time of writing and is also representing a roughly 4% decline over the past 24 hours, according to data from trading view. Prices dropped by nearly $300 in just minutes, but have bounced slightly at the time of writing; but BTC price fell roughly by $500 within minutes on Binance.

In the last 24-hours, BTC prices had reached an all-time high of $10,920and dropped to approximately $10,500. The momentum indicator, Relative Strength Index (RSI) also read 30 and went below indicating an oversold condition as seen in the image below.

The sudden drop in price could be the result of sell-offs coinciding with the recent news of the U.S federal agencies The Commodity Futures Trading Commission (CFTC) and the Department of Justice charging BitMEX co-founders on grounds of violating regulations. BitMEX exchange is the fifth-largest crypto derivatives platform in the world by volume, according to CoinGecko and according to coinmetrics data posted on twitter, BitMEX has $2 billion worth of Bitcoin in their vaults (around 193k BTC).

Bitmex has ~$2b worth of Bitcoin in their vaults (around 193k BTC) 😳 pic.twitter.com/rVKGeT31ZV

The graph of the sharp drop in BTC prices posted on twitter is also worth noting:

Over the last few days Bitcoin was steadily above $10,000 and whether the trend will reverse or not will be something to keep an eye on.

In a reaction to the CFTC levying charges against BitMEX, the latter released an official statement that read:

“We strongly disagree with the U.S. government’s heavy-handed decision to bring these charges, and intend to defend the allegations vigorously. From our early days as a start-up, we have always sought to comply with applicable U.S. laws, as those laws were understood at the time and based on available guidance.”

The blog also stated that BitMEX platform was “operating entirely as normal and all funds are safe”. It also added that: “To allay any potential customer concerns, pending withdrawal requests were processed at 17:45 UTC, in line with our standard procedures. We will process another off-cycle withdrawal at 08:00 UTC, 02 Oct 2020, and then 13:00 UTC, as usual.”

See also  CHAINLINK 10X FROM HERE? IS THIS THE BOTTOM?!