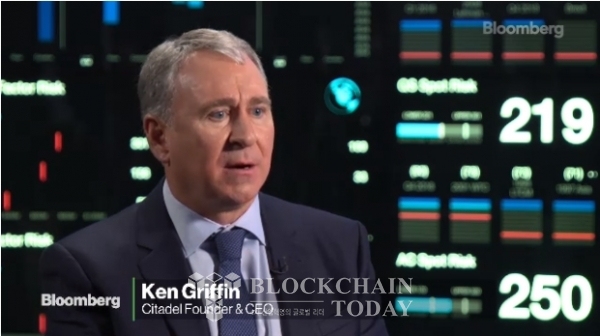 [Blockchain Today Correspondent Han Ji-hye] “Hedge fund tycoon” who was critical of the cryptocurrency industry Ken Griffin, founder and CEO of Citadel LLC “Now I can see the advantages,” he admitted.

According to a Cryptopotato report on the 2nd (local time), US billionaire Ken Griffin argued that “Bitcoin and altcoins will harm the US economy” and “Choose Bitcoin over US dollars is jihadist. Islamic fundamentalist militants) act.”

However, in a recent interview with US business magazine Bloomberg, CEO Ken Griffin admitted that he “had been wrong”, noting that cryptocurrencies have been one of the great stories of the financial world over the past few years, with a market cap of nearly $2 trillion. did. It also predicts that “more companies will enter the cryptocurrency market in the coming months.”

However, CEO Ken Griffin added: “There are still doubts.” “However, because hundreds of millions of people around the world believe in the potential of cryptocurrencies, Citadel is seriously considering becoming a cryptocurrency market maker to serve the needs of institutional and individual investors.”

Meanwhile, according to Crypto Potato, CEO Ken Griffin has been known to change his stance on cryptocurrencies little by little since November of last year. However, even at the time, Griffin predicted that “Ethereum will become the dominant cryptocurrency” and argued that “Bitcoin is too harmful to the environment, slows transaction speed, and is exposed to fraud.”

Celebrities who have changed their critical attitude toward Bitcoin include Kevin O’Leary, who said ‘Bitcoin is garbage,’ and Jordan Belfort, known as ‘The Wolf of Wall Street’. There is this.