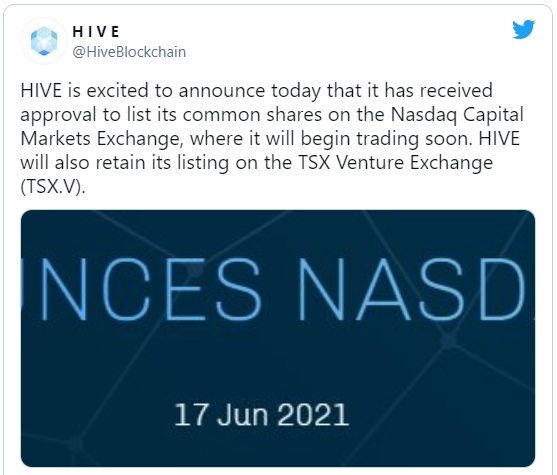 As Cointelegraph reports, with the US Securities and Exchange Commission (SEC) continuing to delay the listing of Bitcoin exchange-traded funds (ETFs), traders from legacy exchanges eager for cryptocurrency exposure will soon have another exit. to be.

Canada Hive Blockchain Technology announced on the 18th (local time) that it had received approval for listing on the Nasdaq Stock Exchange. Hive is currently traded on the Toronto Stock Exchange (TSX) under the ticker ‘HIVE.V’, focusing on Bitcoin and Ethereum mining.

According to the Hive website, the company is focusing on green energy, which is becoming an increasingly important topic for critics of the significant energy consumption of cryptocurrencies. Bitcoin accumulator Michael Sailor recently revealed details of the Bitcoin Council, which will help uncover the ecological impact of cryptocurrency mining, among other tasks.

The company said, “Hive has state-of-the-art eco-friendly energy-based data center facilities in Canada, Sweden, and Iceland, so it is continuously producing newly mined digital currencies such as Bitcoin and Ethereum in the cloud.” We have been accumulating most of the Ethereum and Bitcoin production we hold in secure storage.”

Along with rising prices, many miners are playing an increasingly powerful voice on the global political arena. This month, the CEO of Nasdaq-listed Canaan Corporation called on China to ease its bitcoin mining ban.