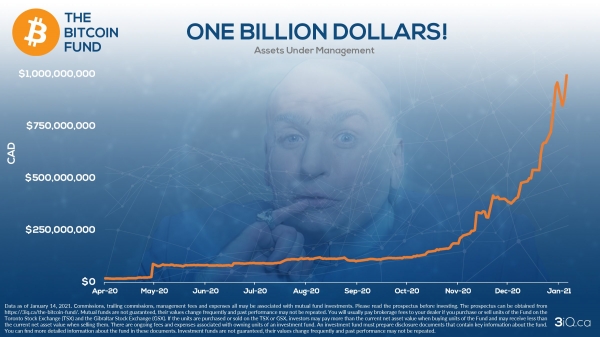 3iQ announced on Twitter on the 14th (local time) that the Bitcoin Fund (QBTC) has surpassed $1 billion. QBTC was launched in April 2020 and rose 900% after hitting $100 million in October of the same year.

3iQ is one of Canada’s largest cryptocurrency companies. In January 2018, 3iQ became the first cryptocurrency fund approved by the Canadian Securities and Exchange Commission. In addition, in February of last year, it signed a partnership relationship with Mavennet, a blockchain startup, to issue stablecoins.

Shaun Cumby, a former executive at 3iQ, is now the CEO of Arxnovum. Axnovum has also applied for a bitcoin fund to OSC. Winkleboss Gemini will provide management services for the Axnovum Bitcoin ETF.

Copyright © Blockchain Today Unauthorized reproduction and redistribution prohibited
READ  It be The Jons 2019!