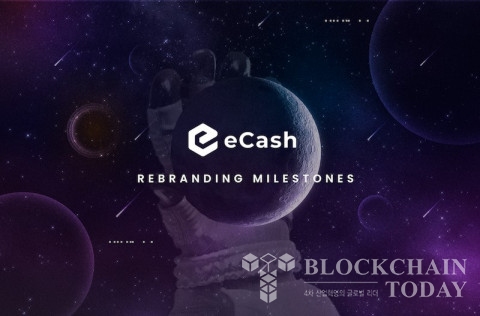 [Blockchain Today Correspondent Han Ji-hye] eCash (XEC) officially announced on the 14th that it had completed a cryptocurrency rebranding by modernizing its logo, ticker symbol, and exchange for trading and investment.

Cryptocurrency rebranding is an extension of the vision and core values ​​dreamed of by the eCash developers, who were also the main players in the establishment of Bitcoin Cash in 2017. Dedicated to long-term investors and supporters, the eCash devs further boosted the scale and quality of the initial project. eCash is an electronic currency that will redefine wealth, economic freedom and digital access for people around the world.

Today, traditional financial institutions and hedge funds are also knocking on the door of the $3 trillion cryptocurrency market. As such, support for decentralized platforms is getting stronger in all directions, and investment in digital currency is also highly attractive. The eCash development team has brought the early peer-to-peer (P2P) digital currency concept to a near-perfect level by grafting the Avalanche technology protocol to the eCash network.

Using the Avalanche Consensus Algorithm, transactions can be made faster than Bitcoin in 3 seconds, and the stability and privacy of the entire transaction process can be improved, while coin and ecosystem stability can be maintained through fork-free upgrades.

The goal of eCash is to democratize the platform so that everyone can access their money, regardless of location and socioeconomic status. The value of electronic money is to provide more benefits while having the same purpose as fiat money. In the case of fiat currency, it is regulated by the institutional system, is vulnerable to inflation, and is affected by the poor usability of paper money. On the other hand, eCash users do not need to open a bank account or obtain a credit card for P2P transactions. In addition, eCash has a fee close to zero and does not keep details of purchase information between users. eCash itself is a digital currency with real value, and is a tool and investment object that supports the trading of more resources and knowledge in our daily life.

eCash made a lot of progress in a short period of time after independence from Bitcoin Cash by changing the system so that it can be easily transacted with 2 decimal places instead of 8 decimal places like Bitcoin or Bitcoin Cash. The eCash devs made significant advances in the eCash technology roadmap, committing over 1900 to the code library last year. In addition, the Cashtab and Electrum ABC wallets have been improved and strengthened so that users can use eCash more conveniently and manage their coins more easily.

According to eCash, the coin price has risen by 1800% and 550%, respectively, after November 15, 2020, when it was spun off from Bitcoin Cash as an independent project, and July 1, 2021, when BCHA rebranded as eCash. Currently, 1BCHA has become 1 million XEC. eCash (XEC) has been listed on more than 30 exchanges, including Binance, Huobi, and Coinex, after the rebranding. By fixing it with shells, it lowered the inflation risk compared to other coins.

eCash said, “We are delighted to announce this massive roadmap update, a major step forward for eCash, which envisions a future world armed with great financial accessibility and digitization, as Milton Friedman, to whom eCash paid tribute, predicted about 20 years ago. The moment of ‘reliable electronic money’ is becoming a reality.”

eCash is preparing for NFT, and will soon launch an NFT marketplace where gas fees are significantly lower than those of existing platforms for NFT transactions. Follow ‘eCash’ on Twitter or join the Telegram community for more information.

“If you invest in OO coins, you will eat 300% of the time” Cryptocurrency-like reception rises