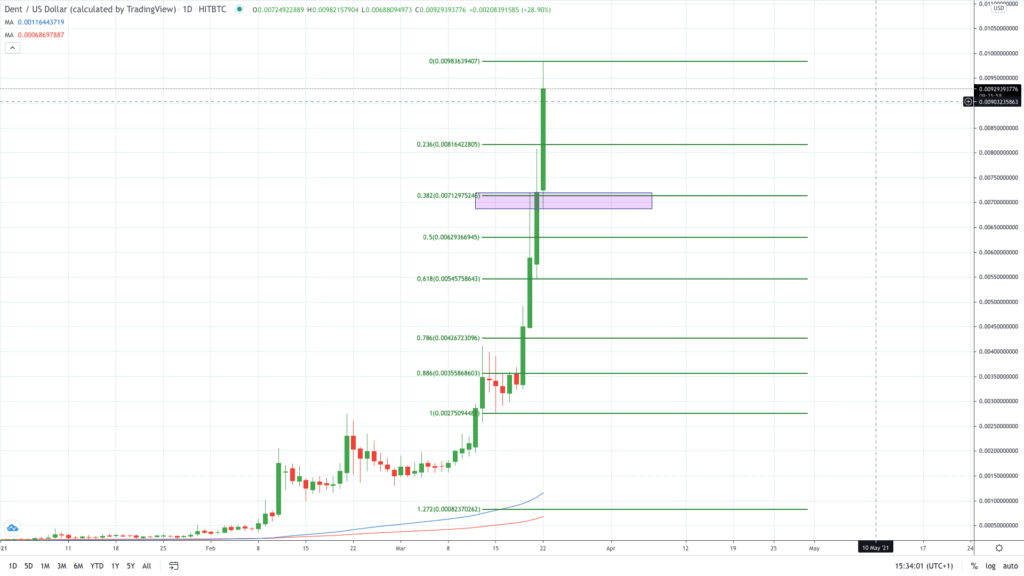 Dent (DENT) price has exploded in March as the higher crypto adoption continues to drive the market higher.

The cryptocurrency market has soared in recent months as more and more companies are embracing crypto solutions. In the meantime, the media is reporting that numerous central banks around the world continue their work on developing central bank digital currencies (CBDCs).

According to the Federal Reserve Chairman Jerome Powell, CBDCs must coexist with cash money.

“One of the three key principles highlighted in the report is that a CBDC needs to coexist with cash and other types of money in a flexible and innovative payment system,” Powell said, citing a report during the Basel Committee on Banking Supervision.

“Improvements in the global payments system will come not just from the public sector but from the private sector as well.”

The Fed Board of Governors is currently testing CBDCs in collaboration with the Federal Reserve Bank of Boston, which is working together with researchers at the Massachusetts Institute of Technology (MIT), said Powell. He previously said that the U.S. does not want to rush to roll out its CBDC due to the U.S. dollar’s status as the global reserve currency.

Still, the central bank is treating the digital dollar plans seriously, based on Powell’s previous comments. He said that the Fed will discuss the topic with the public this year and ask for congressional approval before rolling out the digital dollar.

Other governments around the world are also planning on issuing their own CBCDs, hoping that they will improve payments efficiency and slash costs by launching them on blockchains.

Dent (DENT) price has continued to scream higher with the digital asset up 25% this week after it soared 110% last week. Overall, the price action is up 500% in March.

Given the scale of this move, it’s difficult to predict the future price action for DENT. The zone around $0.0007 is likely to provide an area of interest again for traders looking to buy Dent coin, in case the pullback takes place.

Federal Reserve chairman Jerome Powell said central bank digital currencies (CBDCs) will have to exist side by side with cash and other types of money. In the meantime, DENT price exploded higher in March.

Why does this resident dare to bet that the price of Ethereum will eventually exceed $150,000?