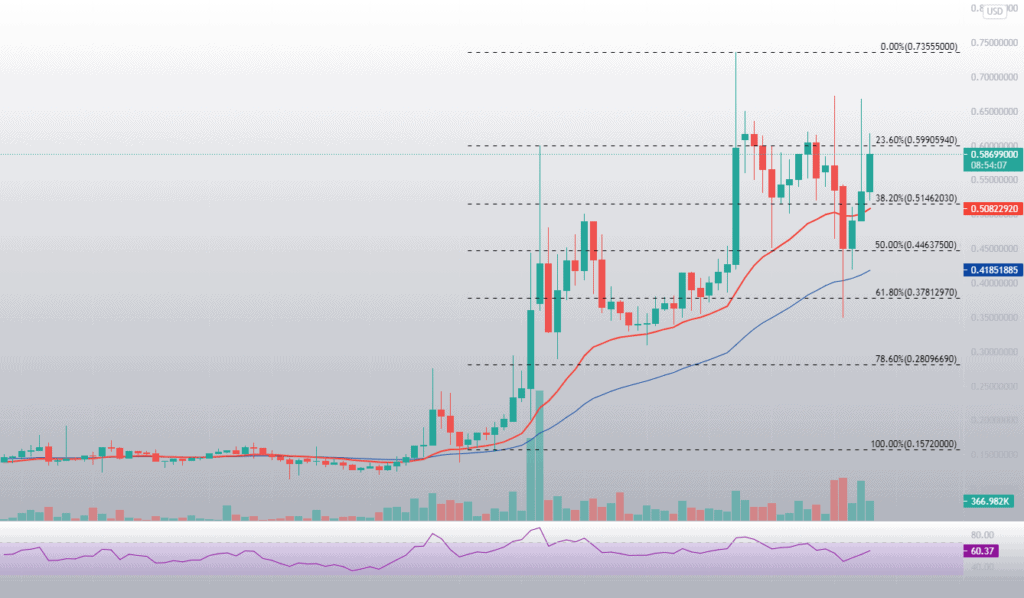 The NFT market has been getting a lot of attention lately, with Enjin leading the way for this crypto subsector. So, what should we expect from the NFT market and Enjin, and should you invest in ENJ now?

Enjin is a project that started off in 2009 as a gaming community platform, but evolved into a whole blockchain-based ecosystem in 2017/2018. It is currently the highest ranked cryptocurrency by market cap in the NFTs & collectibles sector.

Enjin has been pretty resilient to the current market downturn, mostly due to an increase in demand for its token. This increase in demand caused a price increase (or in this case, the absence of price decrease). On top of that, the NFT market leader has seen a massive adoption spree from both non-blockchain-based firms and crypto exchanges.

At the time of writing, ENJ is trading for $0.586, which represents a price increase of 42.87% when compared to the previous month’s value.

Enjin token had three incredible days of trading despite the current market downturn. The cryptocurrency found strong support in the 50% Fib retracement zone after dropping from the $0.667 highs. The current push up is fueled by increased volume, with ENJ trying to break the 23.6% Fib retracement level of $0.599.

Enjin’s first strong resistance level is currently the $0.599 mark, while the cryptocurrency can find support in both the 38.2% Fib retracement level of $0.515 and the 21-day EMA.

ENJ’s RSI on the daily time-frame has, after almost a week of descending, changed its direction to ascending. Its current value is sitting at 60.37.

Zooming in to the hourly time-frame, we can see that Enjin is currently in sort of a triangle pattern. The cryptocurrency found strong support in its 21-hour EMA, and is pushing to pass the 23.6% Fib retracement level of $0.599.

If ENJ manages to reach $0.6, it will most likely trade between it and its next resistance level of $0.635. However, its movement will be influenced by the overall crypto market movement as well.

The lock-up volume has flowed into 1 billion US dollars in 3 days. Is the valuation of the Avalanche avalanche agreement reasonable?