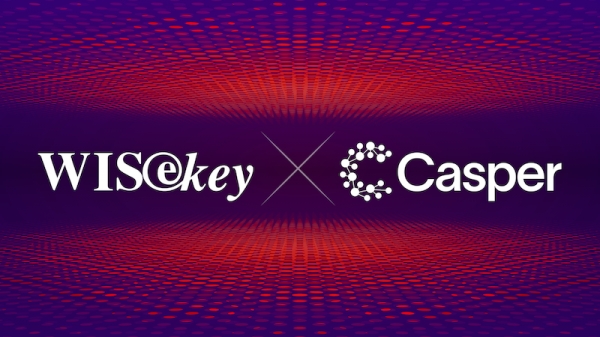 [Blockchain Today Reporter Jihye Han] On the 15th, Casperlabs, the next-generation blockchain mainnet protocol based on Ethereum, announced that it has signed a partnership with WISEKey.

Through this partnership, Casper Labs announced that it will use blockchain technology, artificial intelligence and IoT together with WISeKey to build a large-scale digital identification (DID) ecosystem market for people and objects on the Casper Network. Casper Labs will provide services and support for WISeKey as it establishes the NFT trading market on the Casper Network.

WISeKey is currently a security partner for more than 3,500 brands including AWS, Microsoft, IBM Watson, and more, combining the security features of WISeKey with Casper Labs’ various developer tools for a wide range of enterprise NFT application use cases not previously available in the blockchain-based marketplace. And building business models.

Through this agreement, WISeKey said, “We will be the perfect partner to build a secure and unique NFT market in Casper Networks by utilizing WISeKey’s DID solution to be authenticated and identifiable in both physical and virtual environments.” Through Casper’s Proof of Stake architecture, it has been revealed that each transaction will enable smaller energy consumption than the existing Proof of Work protocol.

On the other hand, Casper announced that all public sales on the Coin List platform (Options 1, 2, 3, 4) were sold out last from the option 4 sale on the 9th, and pay attention to a number of scam websites and channels related to the Casper token sale. Said that.