On the eve of Immutable X’s launch, its chief technology officer detailed the design concept of the project and its role in the future development of the NFT field.

Lianwen once introduced in November 2020 the development company behind the card game Gods Unchained, which plans to launch Immutable X, the NFT trading platform on the second layer of the Ethereum network. This is a high-performance NFT trading platform based on StarkWare’s ZK Rollup technology. Currently, Immutable X is coming online soon. After going online, it is expected that Ethereum NFT will be able to carry mainstream large-scale applications.

Recommended reading: “I made an NFT card, Immutable also wants to be an NFT trading platform based on ZK Rollup “

On the eve of the launch of Immutable X, its CTO has just written an article explaining in detail the design concept of Immutable X and its role in the future development of the NFT field:

We hope to solve the main problems faced in the Ethereum NFT ecosystem:

At present, the only way to solve these problems is to sacrifice the security of the asset agreement, sacrifice the decentralization, and switch to the lower security blockchain to obtain the side chain (these are also Ethereum’s competitors, not expansion solutions. ). Immutable doesn’t think it is necessary to choose between these aspects, and Immutable does it.

Whenever you get a transaction NFT in Immutable X, your transaction fee is zero. Using zero-knowledge proof technology, all transaction verifications directly reach the security level of the Ethereum main chain-the first NFT second-layer network application on Ethereum. Users can choose between Validium and ZK Rollup through a system called “Volition”, allowing NFT applications to carry billions of transactions, while some are all on Ethereum.

At the beginning of the development of Immutable X, the most critical decision for us was the choice of the underlying scalability solution. Here I want to talk about the thought process of making this key decision.

We never thought about migrating to other blockchains or to side chains, because the network effect of Ethereum has taken shape and is growing. We care about true decentralization. We spend so much time investing in blockchain technology. If we have to rely on a certain database, it will be a waste of time. We support Ethereum and we believe that:

READ  Back to 2012, how does the upcoming Coinbase attract the earliest investors?

Matic side chain L1 options have achieved a certain degree of scalability. A shortcut was taken, but at the cost of sacrificing asset security or decentralization. We hope to build a real L2, L2 that can inherit the security of Ethereum L1, as Vitalik said:

L2 can have the same level of security assurance only by relying on the main chain. That is, if you have coins in L2. As long as the main chain is safe, you can safely transfer coins to the main chain. Even if L2 is 51% attacked, it will not prevent you from switching. This is not the case with side chains. A 51% attack on L2 can steal your tokens from the sidechain.

The difference between L2 and sidechain

After excluding the side chain, we set out to study the huge growth of the Rollup ecosystem. We consider the two types of Optimistic and zero-knowledge proofs when making decisions.

Optimistic Rollup is very suitable for processing only ETH/ERC-20 and other homogeneous asset applications that rely on composability, but it has limited applications for NFT.

First of all, Optimistic Rollup requires one to two weeks of withdrawal time. When dealing with homogenized assets, this aspect may be improved, using fast withdrawals, but for special assets such as NFTs, fast withdrawals cannot bring liquidity. Optimistic rollup requires a lot of reasoning to encourage fraud reporting, and the fraud proof model also has many flaws .

We narrowed our focus to solutions based on zero-knowledge proofs (rollups/validium). Due to the proof of validity of use, ZK Rollup supports instant withdrawals. As Vitalik said: “In the medium and long term, ZK Rollup will eventually win out of all use cases.”

The current shortcomings of ZK Rollup (which does not support general-purpose computing) have minimal impact on the NFT ecosystem. With the development of outstanding projects such as CAIRO in the future, this problem is expected to be resolved.

The reason why we chose STARK instead of SNARK or other systems is that STARK can be set up without a secret ceremony , which can achieve anti-chain computer-level security and use simple encryption algorithms.

Compared to other certification systems, STARK is less likely to be attacked. We work closely with the excellent team StarkWare, who continue to surpass and prove the feasibility of the technology.

READ  How DeFi trading is evolving after a whirlwind 2020

Finally, it is especially convenient to choose to build on the STARK validity proof. Without sacrificing user security, real-world problems facing the NFT field can be solved. This is the only solution we recognize, and it will continue to improve and succeed in the end.

Data availability is an important concept of Rollup, because in failure cases (malicious or not acting as a Rollup operator), users must submit the Merkle path from the asset to the root data. In Validium’s zero-knowledge proof, as long as the data is always “available” to clients in need, security can continue to be guaranteed. The disadvantage of ZK Rollup data is that it introduces linear cost of updating funds in batch transactions. Although relative to the 100,000 gas of network transactions on the first layer, only about 1,000 gas is required for each update of the fund library.

Even if the gas cost is reduced by a hundredfold, the data usage of ZK Rollup is still limited. Every time the fund database is updated with 1000 gas, 7 million NFTs (such as Gods Unchained Creation) will consume about 7 billion gas. In the case of a gas fee of 200 gwei, this would cost 1,400 ETH (approximately 2.5 million US dollars), which is 30 cents per asset.

Our analysis shows that this cost is unsustainable for developers (main game studios) who take into account Ethereum forging NFTs. If “Fortress Night” is deployed on Ethereum, it is possible to cast billions of NFTs a year. We must ensure cost savings without sacrificing underlying security. We considered adopting a single casting fee, but quickly realized that this is against our overall goal, which is to let developers ignore the casting cost and focus on designing the best application.

Fortunately, we can work with the StarkWare team to develop a system Volition (“will”) that allows users to obtain the highest data availability while fully satisfying the scalability of the mainstream market. This allows users to choose whether to use Validium or ZK Rollup.

To ensure data availability in the future, we have established a “Data Availability Committee”. This is composed of a well-known team in the industry, signing each batch of transactions, indicating that the data has been updated from the root data (executed through smart contracts). This is very different from sidechain verifiers or block processors. As long as the data committee is honest, the data will continue to be available without the need for consensus algorithm processing. In addition, since our system does not require privacy, we will publish data to IPFS on a regular basis.

READ  Chainlink (LINK) Rallies 20%, But Here’s Why It Could Reverse Gains

In addition, even with these protections, Validium zero-knowledge proof alone is not the long-term goal of Immutable X.

Immutable X goes online to reserve space for Volition expansion. Using the Volition model, users can choose whether to publish a specific asset to Validium or ZK Rollup. We will see the emergence of NFT high-frequency trading companies using Validium zero-knowledge proof to achieve global expansion.

Either way, the important message is: the security level of assets on the second-tier network is always consistent with the first-tier network of Ethereum, and we support users to choose freely. Transparency and selectivity are the main elements of decentralization.

When deciding when Immutable X will interface, we chose to start thinking backwards from customer needs. Most NFT developers currently developing in Ethereum have to spend a lot of time learning Solidity, learning blockchain development and deployment, and learning how to interact with Ethereum instances and nodes. The goal of Immutable X is to allow developers to focus on building useful products for users without having to learn new development models and toolkits.

We choose the format that everyone is familiar with: REST API. Applications can access user balances, mint assets, or request users to sign transactions, all of which are done only through the REST API. This API will support all basic functions of basic NFT, ERC20 and ETH. In the future, we will allow applications to extend specific NFT logic, including all smart contract logic, while retaining the REST API operation interface.

Of course, this design means that the client depends on the operational stability of the Immutable API. This is similar to that most applications of Ethereum currently rely on node service operators such as Infura and Alchemy. It’s just that the node can use multiple service operators, or deploy by itself to ensure that it does not rely on a single operator. Eventually we will achieve the same diversification, including block browsing tools and operation interfaces, which can be deployed by multiple API operators.

When will Immutable X go live?

In March of 2021, we are on the fast track. The beta version of Immutable X is expected to be open to Gods Unchained this month, and will be open to other game partners and the market later. 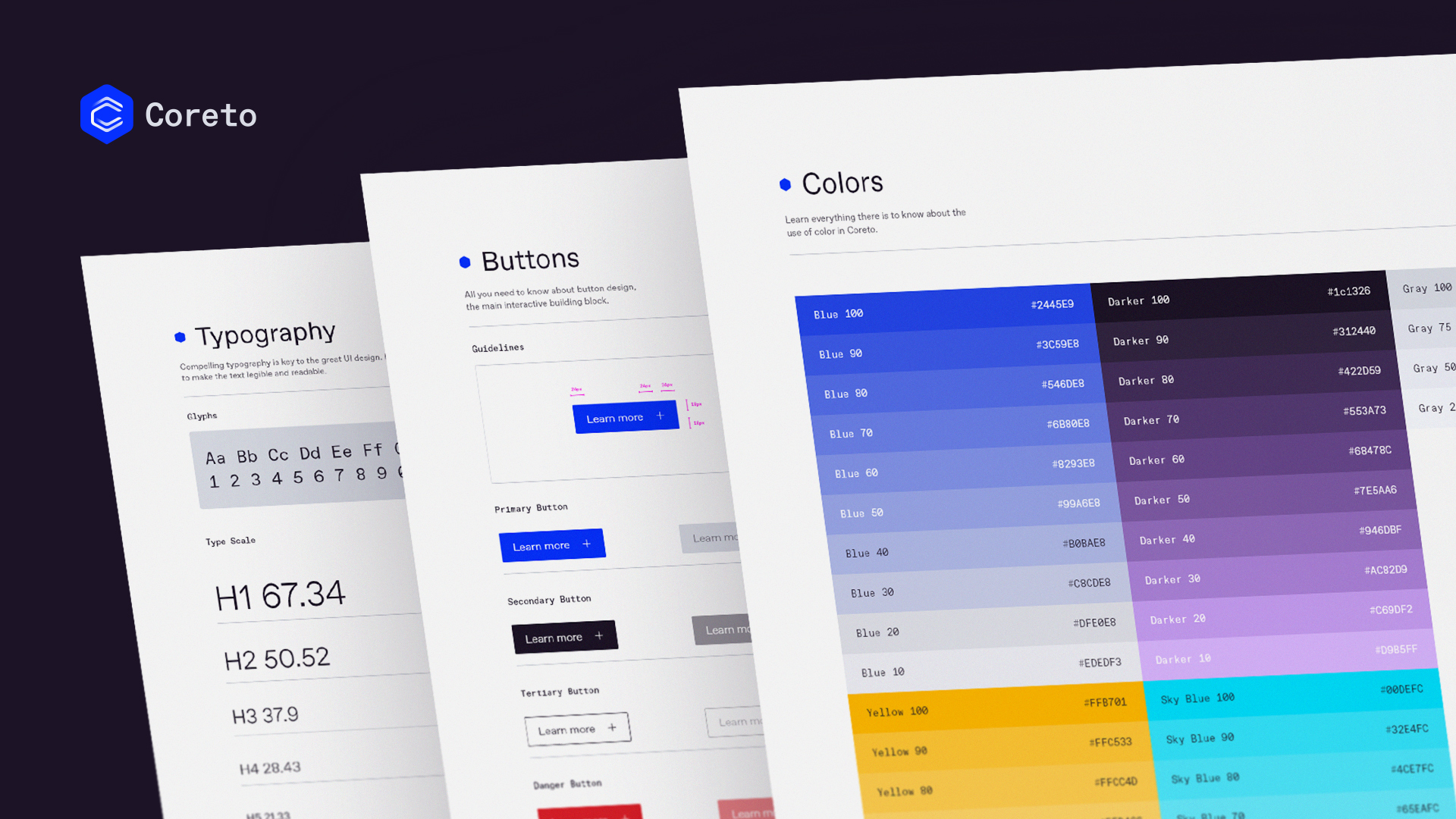 Coreto Platform to Get a Makeover with Coreto Design Language