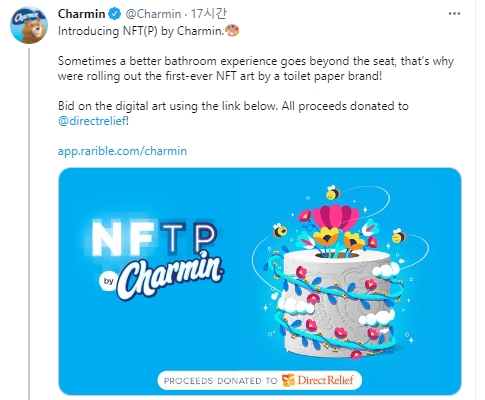 [Blockchain Today Reporter Jihye Han] The NFT (non-replaceable token) market is not limited to digital sports collectibles and art professionals. Big brand companies are also flocking to the market one after another.

NFTP has decorative rolled toilet paper and toilet paper with the image of the bear mascot product line. “All revenue from NFT sales goes to Direct Relief, a non-profit organization that provides resources to healthcare professionals in disaster areas,” said Charming.

Charming said, “Each NFTP will be sold with a physical display so that cryptocurrencies can hang art next to the actual toilet paper.” At the time of Cointelegraph’s report, the highest bid is 1 Wrapped Ethereum (WETH) per work, which is equivalent to about $1,800 (approximately 220,000 won).

Procter & Gamble’s subsidiary is the latest major brand to jump into the comic-looking NFT space in line with the growing cryptocurrency trend. Earlier this month, Taco Bell launched an NFT with its logo on the LaRable market. The media outlet, Quartz, also published a report on the technology itself as an NFT.

Copyright © Blockchain Today Unauthorized reproduction and redistribution are prohibited.
READ  How should the automated market maker AMM deal with the arbitrage of sharp traders?

Second-tier ecological update: OKEx will support Ethereum L2. How can Binance and Huobi, which have their own public chains, accept the move?