Chainlink’s native cryptocurrency LINK might be the next candidate for a major bullish move. It was among the top trending cryptocurrencies at press time and its price action might be headed for a pattern breakout.

LINK managed to overcome the bearish doubt in the first half of the week in favor of a strong bullish push since 7 September.

The alt was roughly up by 20% in the last three days, confirming the return of strong demand. However, the rally has resulted in another rested of its six-month support level and a breakout might be in the cards.

A breakout might usher in the start of a new bullish trend. A welcome relief for LINK investors considering that LINK favored the downside for the last five months. Its $7.81 press time price level still represents a slight discount compared to its $9.48 two-month high.

LINK’s ongoing bullish attempt is backed by a stronger accumulation compared to its previous attempt in July and August. This is reflected in the Money Flow Index (MFI) which indicates that aggressive accumulation has been taking place since the last week of August.

A spike in social volume underscores LINK’s upside, especially due to hype around an upcoming conference. The event dubbed Smartcon will be held towards the end of September. It will feature presentations from Chainlink’s team.

More observations on the on-chain side of things reveal an increase in daily active addresses. This plus a spike in whale transaction count confirms a wave of demand that is responsible for the ongoing upside.

Can LINK sustain the current rally?

LINK is currently on a recovery trajectory but there is still some short-term uncertainty. A sentiment shift caused by the expectations of more downside for risk-on assets interrupted LINK’s rally in the first half of August. Such an outcome might still occur again in the next three weeks.

On the other hand, LINK has managed to rally despite the presence of sell pressure by some whales. Whales holding between 1 and 10 million LINK coins reduced their holdings in the last two days likely cashing out profits.

Other whale categories including whales holding more than 10 million contributed to the ongoing upside. Investors should watch out for a unanimous outcome where all whales are in accumulation. Such an outcome would validate the expectations of an extended bullish performance in the short term. 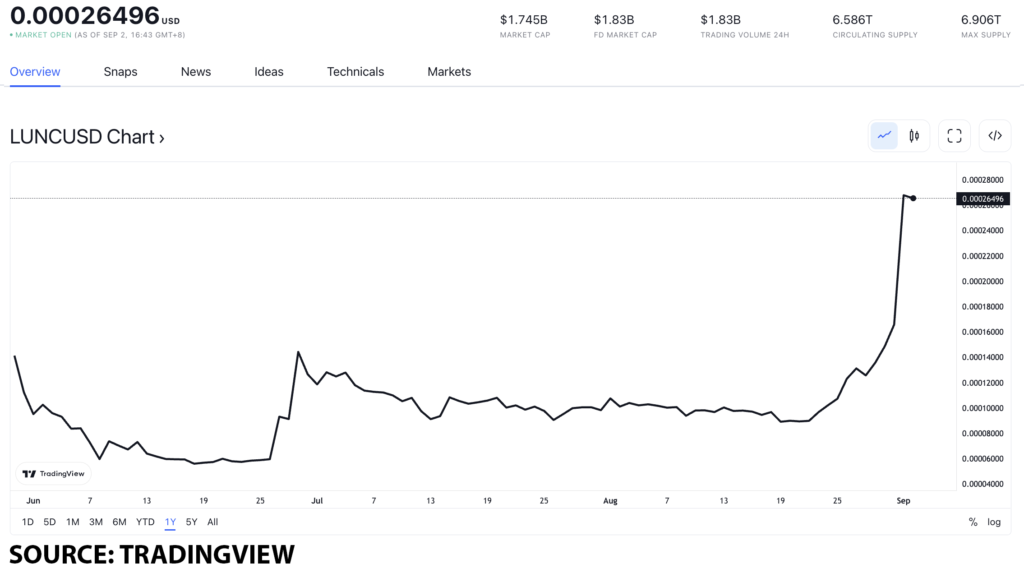 Terra Classic’s LUNC price sees a spike, but can this momentum carry on?