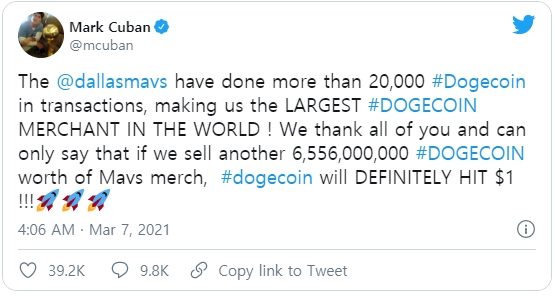 [Blockchain Today Reporter Ji-eun Lee] Dallas Mavericks owner Mark Cuban predicts that the DOGE price will reach $1 in the future. This is a remark that came three days after Mavericks used Dogecoin as a payment method.

According to Cointelegraph reports, in a tweet on the 6th (local time), Cuban said that customers had spent more than 20,000 Dogecoins (about $1,018 as of local media coverage) in Dallas Mavericks transactions, and his franchise is currently the world’s best. Claimed to be a big Dogecoin merchant. The billionaire predicted that “if basketball fans buy a Mavericks product worth 65,56 billion Dogecoins, the token price will definitely reach $1.”

Mavericks is one of the first NBA franchises to recognize cryptocurrency as a payment method for tickets and goods when it began accepting bitcoins through wallet company BitPay two years ago. Mavericks fans can also purchase equipment and souvenirs with BCH (Bitcoin Cash), USDC (USD Coin), Gemini Dollar (GUSD), Paxos Standard (PAX) and Binance USD (BUSD).

Despite being a joke coin, Dogecoin has risen sharply in recent months as the tokens are mentioned on social media by billionaires, including Cuban and Tesla CEO Elon Musk. It is very likely that Musk’s tweet contributed to the highest ever-higher token price, from $0.078 in January to $0.078. The transaction price of Dogecoin at the time of local media coverage was $0.0509. In other words, 1,864% growth would have to be achieved to reach $1.

The owners of the Dallas Mavericks refer to Dogecoin as an economic educational tool, saying, “This token is the best entertainment for making money in the cryptocurrency market.” “Although the payment of Dogecoin by basketball franchises has skyrocketed, Cubans are still having fun, and their opinions on tokens have not changed,” he said.

Can Dogecoin copy the story of GameStop, a game station, and the Wall Street?