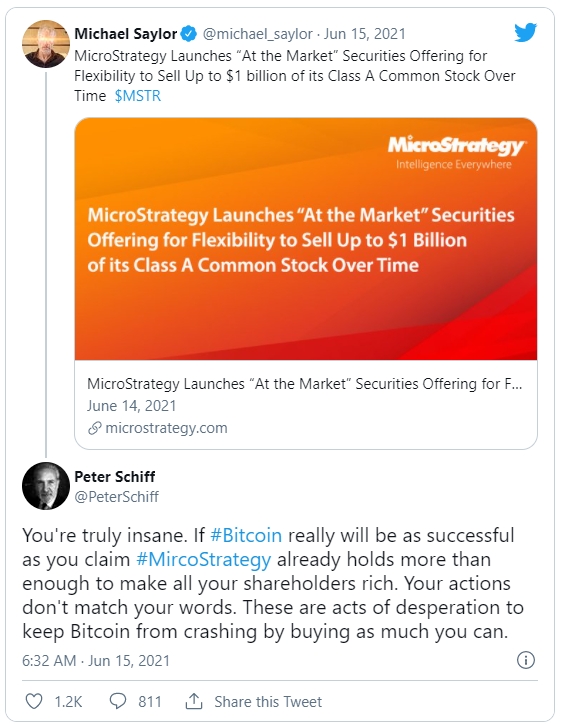 If you have been interested in the cryptocurrency market for the past year, you are bound to come up with two names as the most vocal commentators. Bitcoin’s leading advocates include Michael Saylor, founder and CEO of Micro Strategy, and leading opponents include renowned economist and gold advocate Peter Schiff.

The two argued quite a bit over their differences of opinion about Bitcoin. The latest buzz came on the 15th (Korean time) after Sailor’s software company announced a new public offering plan to raise $1 billion. As in the past, MicroStrategy plans to allocate significant amounts to Bitcoin.

This is where the criticism of Bitcoin intensified. Schiff argued that MicroStrategy already saw Bitcoin as ‘enough’ and that if the asset had been as successful as Sailor hoped, it would have made all shareholders rich.

“Instead of doing something positive for shareholders and investors, Sailor bought more Bitcoin to prevent it from collapsing,” Schiff said.

Schiff claims that MicroStrategy already has a lot of bitcoin, and it’s worth examining just how big that asset is and what the company and its leaders have done for the community.

Although it was revealed to the public that MicroStrategy bought Bitcoin in August 2020, the beginning of this story could actually be known a few months ago. As Sailor revealed at a recent Bitcoin conference in Miami, he began educating himself about the properties of assets after the coronavirus hit the West in early 2020.

He made his first purchase on June 3 of that year. The company continued accumulating bitcoins after August and now has more than 90,000 coins. If a company raises $1 billion and buys bitcoin, its holdings could well exceed 100,000.