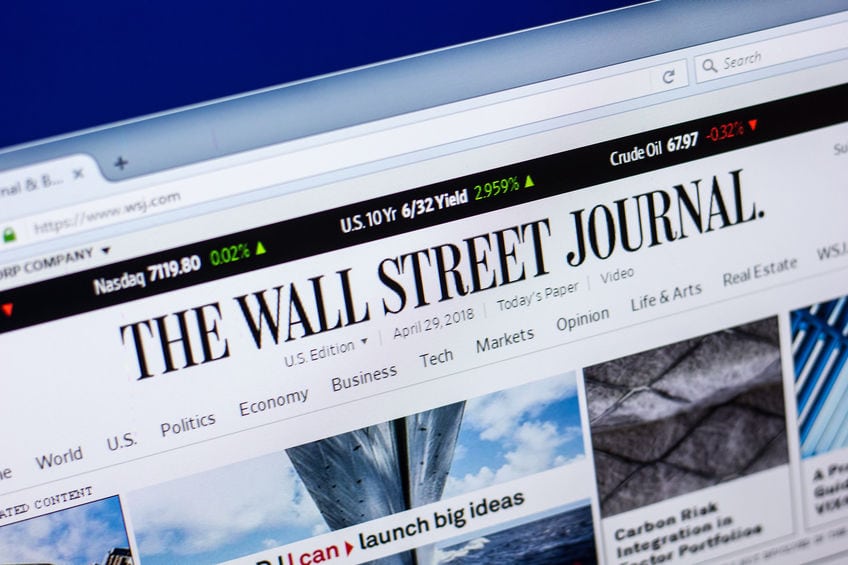 It’s no longer news that the mainstream financial sector is gradually warming up to Bitcoin and cryptocurrencies. Blockchain, the technology behind Bitcoin, has also proven to be a catalyst for technological innovations in different sectors. And Bitcoin has continued to conquer and surpass several benchmarks set for the top cryptocurrency.

Yesterday, it was the turn of the mainstream media to talk about Bitcoin’s 80% rally, as the crypto coin reclaimed five-figure prices.

Bitcoin has captured the attention of the media from the top end to down, with the Wall Street Journal (WSJ) discussing its adoption among top institutional investors. And the fact that it captured the discussion on its front page speaks volumes about the growing popularity of Bitcoin in the mainstream.

The media is a powerful voice, as anything made the center of the discussion is most likely to go viral. The 80% increase of Bitcoin’s price is the highest it has been for several months, and many pundits are predicting the crypto coin could surpass its previous record high of $20,000 per BTC.

The WSJ report is of particular interest because it noted that Bitcoin is gradually being adopted by “Wall Street billionaires” Stanley Druckenmiller and Tudor Jones, as well as other public figures. Last week, a U.S. senator-elect, who is a Bitcoin owner, vowed to push for the further adoption of Bitcoin and cryptocurrencies.

The report of the media giant is coming after a lull in Bitcoin’s presence in the mainstream, as the cryptocurrency sets new records in the market.

See also  Barron’s Recommends Hedging A Stock Portfolio, But What About Bitcoin?

Additionally, Grayscale investments and hedge fund managers have made significant investments in the top cryptocurrency, which WSJ has emphasized. Also, there is now an increased investment from retail investors, who can access cryptocurrencies via familiar financial service companies.

According to the report, last year Bitcoin’s volumes on Square Cash App were $555 million. But for the third quarter of this year alone, the cryptocurrency has risen to $1.6 billion. And Paypal’s acceptance of Bitcoin payments on its platform has increased the trade activity on ItBit and other exchanges.

Paypal’s Chief Executive Officer Dan Shulman also predicted that cryptocurrency will soon “move from being less of just an asset class and more into a currency,” based on the current adoption levels.