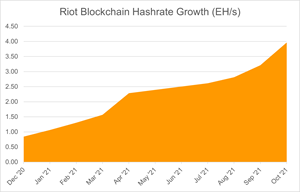 The current global shortage of ASIC mining equipment has held the current network-wide hash rate at lower levels, creating a beneficial mining environment for miners currently operating, especially those operating at scale.  Future changes in network-wide difficulty rate or hash rate will impact all BTC miners, including Riot, in their production of BTC.

The Company currently plans to provide recurring monthly operational updates and unaudited production results through the end of 2021. These production updates are intended to keep shareholders informed of Riot’s substantial operational growth as it continues to deploy its expanding mining fleet.

The Company is pleased to announce the purchase of 1,500 S19j (90 TH) Pro Antminers from Bitmain Technologies Limited (“Bitmain”), which are scheduled for delivery in October 2021. Once deployed, these 1,500 miners, combined with the additional 25,400 miners scheduled to be received during 2021 under previously announced purchase orders, are expected to achieve an estimated aggregate bitcoin mining hash rate capacity of 4.0 EH/s.  The aggregate of these miners will utilize approximately 127 MW of energy with an overall estimated operational efficiency of approximately 32.38 ±% 5 joules per terahash (J/TH).  The Company is continuously monitoring opportunities for strategic hash rate growth.

In connection with previous purchase orders announced, 2,201 S19 Pro Antminers were shipped late February 2021 and are in the process of being received at the Coinmint, LLC facility in Massena, NY, with installation expected to be completed over the next week. This delivery results from the purchase order with Bitmain previously disclosed in August 2020.

The deployment of these 2,201 S19 Pro Antminers, will result in a total of 13,746 Antminers in operation utilizing approximately 43 MW of energy, together with an estimated hash rate capacity of 1.3 EH/s.

Riot has an additional 25,400 S19 Pro and S19j Antminers on order with Bitmain, which are scheduled for monthly deliveries through October 2021.  Once fully deployed, the Company estimates it will have a total of 39,146 Bitmain Antminers in operation with an estimated aggregate bitcoin mining hash rate capacity of 4.0 EH/s. Based on recent shipments, Riot anticipates continued timely shipments in accordance with the Bitmain purchase orders.

See also  Gaimin’s Gamification in the context of smart cities