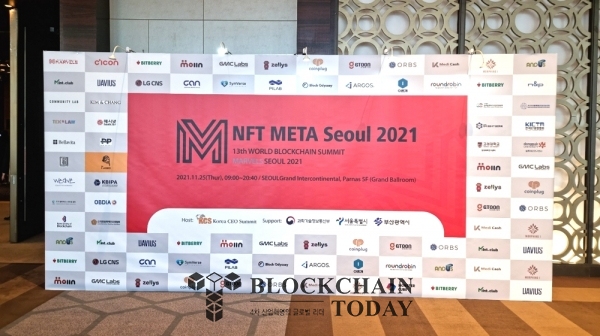 The Korea CEO Summit (CEO Park Bong-gyu) was held at the Grand InterContinental Seoul Parnas on the 25th with the main theme of ‘NFT, the emergence of new financial assets / The beginning of the metaverse to the voyage of the metaverse’ at the ’13th World Blockchain Summit’. It was announced that ‘NFT META Seoul 2021’ was held as part of the ‘Marbles’ event.

On this day, in accordance with the government’s COVID-19 quarantine compliance guidelines, only those who have completed the corona vaccine or those who have confirmed the PCR test within 48 hours can enter the venue, and thoroughly implement the quarantine system, such as wearing a mask and checking your temperature from the moment you enter. takes place in the midst of

The agenda of this conference is △Debate on policies to suspend taxation of virtual assets and protect investors △The Next Blockchain △NFT and Blockchain Startup Survival Strategy △NFT: Breaking the Border between Virtual and Real World △Metaverse Daily Life △ NFT will present and discuss nine topics, such as the emergence of new financial assets, the beginning of the metaverse, how to introduce an open regulatory system for advanced countries, and innovators and entrepreneurs.

In the first session, themes were presented and discussed under the theme of ‘Policy Debate for Deferring Taxation of Virtual Assets and Protection of Investors’. Lee Jong-koo (law) Kim & Chang, lawyer and chairman of the self-regulation committee of the Korea Blockchain Association, and Lee Hae-bung, director of the Upbit Investor Protection Center, will participate as presenters or panelists.

In the second session, under the theme of ‘The Next Blockchain’, Hwain Choi, a blockchain evangelist known as Yanolja’s outside director, will participate as the chair. Coinplug Director Kim Jeong-so, LG CNS Blockchain Business Promotion Team Director Jeong-hwa Lee, CAN (Community Alliance Network) co-founder Eun-young Lee, and Social Infrastructure Tech CEO Jeon Myeong-san will be on stage for the presentation of the topic.

In the 4th session, the topic of ‘NFT: Breaking down the boundary between the virtual and real world’ will be discussed, and Inho Inho, a professor at Korea University and director of the Blockchain Research Institute, will be the chair. The subject speakers included Kwon Bu-sang, CEO of Jelly Space, Jeon In-tak, MediLike CEO, Park Seong-joon, Andus and Davius ​​CEO, Choi Soo-hyuk, founder of Symverse and Chairman of Korea Blockchain Startup Association.

In the 5th session, a special talk with the title of ‘Metaverse Daily Life’ will be held, and Next & Partners (N&P) Group Chairman Lee Seung-han (former Homeplus Group Chairman) will participate, and announcer Lee Seung-eun will host.

In the 6th session, a presentation and discussion will be made on the topic of ‘NFT, the emergence of new financial assets’, and Professor Ahn Yu-Hwa of Sungkyunkwan University will be the chair. In addition, Ki-Young Kim, CEO of MorpingI, Young-Hwi Cho, co-founder and designer of Hunt (Mint Club), Do-Hyun Park, CEO of PyLab Technology, Ph.D.

In the 7th session, discussions and presentations were held on the topic of ‘The Beginning of the Metaverse vs. Voyage’, and was chaired by Park Soo-yong, President of the Korean Blockchain Society and Professor of Computer Engineering at Sogang University. In particular, in this session, Jae-beom Yoo, founder and chairman of Bitberry Finance, will give a keynote speech on Metaverse, and Jae-yoon Ok, founder and CEO of Moin Co., Ltd., and Eun-dong Kim, Korea representative of Orbs, will participate as topic speakers.

And, at the Summit Forum, a closing special lecture, special lecture was given by Park Hee-jae, founder of SNU Precision and professor of Mechanical and Aerospace Engineering at Seoul National University under the theme of ‘Innovators and Entrepreneurs’, and special lecturer Joo Young-seop (former head of Small and Medium Business Administration) at Seoul National University as a moderator. take on It is an evaluation that the best experts in blockchain, NFT, and metaverse appeared as speakers.

In particular, on this evening, a VIP networking time for business expansion, ‘MARVELS Night’ program, was held while inviting key figures such as speakers, blockchain experts, and members of the Korea CE Summit’s Summit Club.

Bong-gyu Park, Chairman of Korea CEO Summit, said, “I am delighted to be hosting the thirteenth World Blockchain Summit Marbles. Like the name of MARVELS, which has a ‘wonderful’ meaning, it will play a role as a refreshing agent in the development of blockchain, NFT, and metaverse industries, as well as holding it as a fruitful and wonderful event.” He said aspirations.

AMA with Matilda at Asia Blockchain Community on 7 December 2021