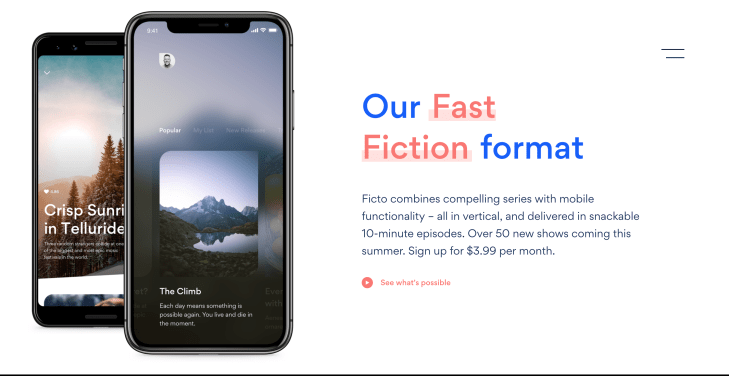 Even as Quibi, the short form video platform from Jeffrey Katzenberg’s WndrCo, reportedly looks to raise another $1 billion, rival service Fiction Riot continues to steadily build out its pipeline of short form serials.

The Los Angeles-based company has already launched a beta version of its streaming service, Ficto, and yesterday announced a host of new shows that will appear on the app later this year.

Ficto is bringing to market adaptations of bestselling books and original productions which will be released with theatrical films and has plans in the pipeline for other forms of scripted and unscripted entertainment.

On the back end of its service, Fiction Riot is using blockchain-based tools to create a more transparent way to share revenue and manage payments among writers, artists and producers of new series, according to company founder and chief executive Mike Esola.

Meanwhile, Quibi is reportedly looking to raise another $1 billion to keep up the pace of spending big dollars for big names to draw new audiences to its service. The company is reportedly spending $5 million per hour of storytelling for some of its titles.

Both services are entering a highly competitive and increasingly fragmented entertainment landscape with many big studios building moats around their content in the form of exclusive subscription-based streaming services. Both Quibi and Ficto see short form as a way to break through with a new kind of storytelling built for mobile media first.

Alongside the series sourced from Ficto’s online “Million for Million campaign“, which will reward $1 million to the first producer of an episode that reaches 1 million unique views on the site.

“Within a week of publicizing our Million for Million campaign, we received over 400 submissions from professional and aspiring filmmakers with premium content,” said Mike Esola, Fiction Riot co-founder and chief executive. “From those, we accepted 20 outstanding series that rival anything we’ve seen across streaming services today, and are now scheduled to become available on Ficto in the coming months”

Through Ficto, Fiction Riot plans to premiere more than 50 series at launch and will release new shows weekly.

The slate of programming in development includes:

What’s impressive is that Fiction Riot is signing all of these deals without the over $1 billion Quibi is raising for its own app-based service, whose launch date had been something of a moving target. The company initially planned to launch in late 2019, before pushing that date back to April 2020.*

In some cases, Esola said, it’s as easy as picking up shows from the cable companies that can no longer afford them. He points to the success of Netflix’s hit “You”, which the streaming service picked up from Lifetime.

“I call it the great migration of content,” Esola says.

For Fiction Riot the pitch is better revenue sharing and economics for the people involved in the productions and better tools for fan engagement that are native to mobile devices.

Things like click to purchase, push notifications for announcements of live streams or special features, and opportunities for greater interactivity for audiences with shows, are all options on mobile platforms that are much harder to pull off with linear television, or streaming, says Esola.

“It’s up to startups like us to address the grassroots movement,” for content creators, Esola says. “It will never happen from the dinosaurs. They’re never going to agree to it.”

*An earlier version of this article cited a moving target for Quibi’s launch date. That date was confirmed in March at South by Southwest.