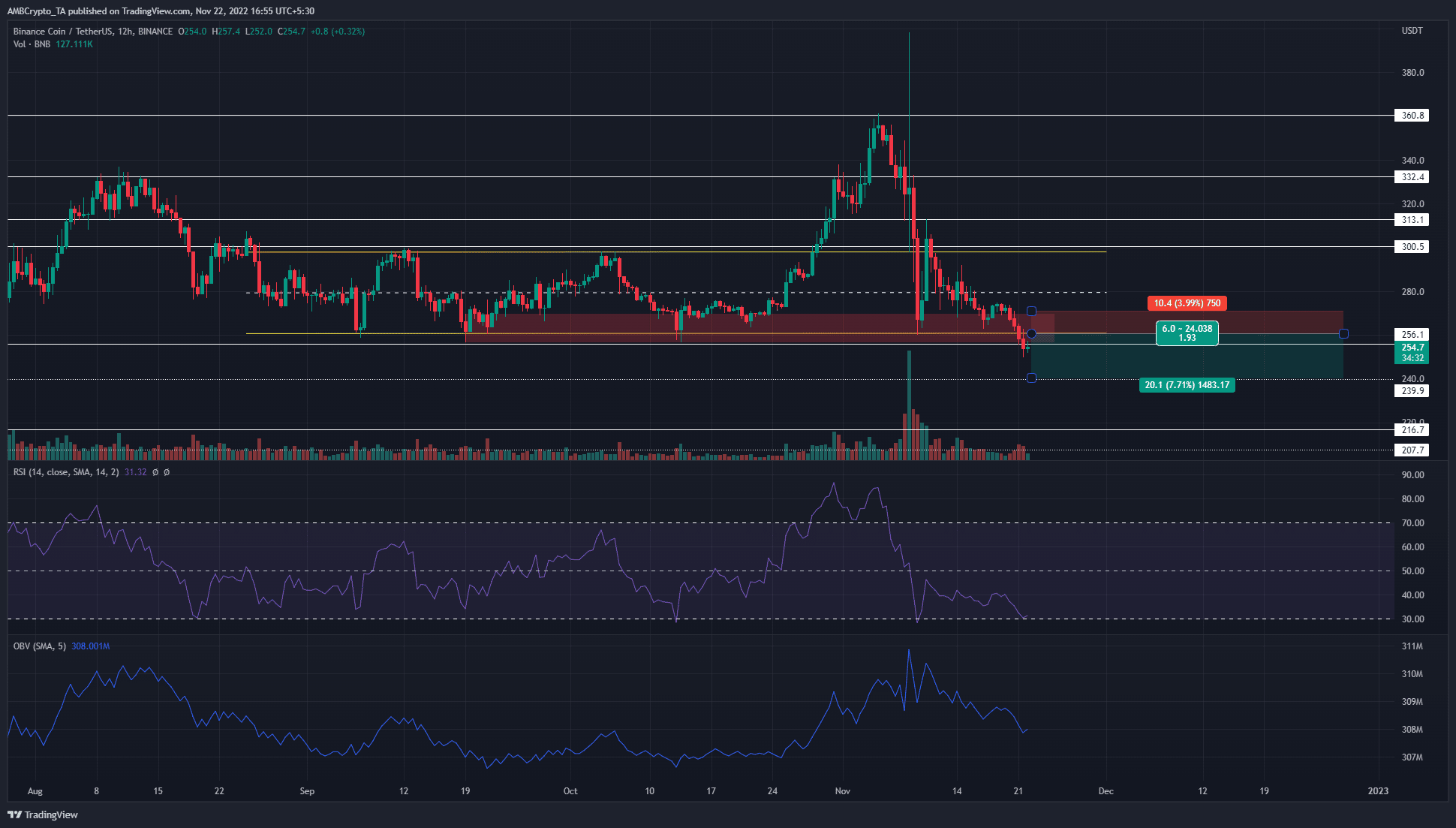 Disclaimer: The information presented does not constitute financial, investment, trading, or other types of advice and is solely the writer’s opinion

Binance Coin had a healthy start to November, but it all went haywire for the bulls. The implosion of FTX brought many rallying coins to a screeching halt. Now, BNB has a bearish market structure on the higher timeframe charts, and sellers will be looking for an opportunity to position themselves short in the futures market.

Bitcoin has been weak on the price charts in recent days as well. Therefore, there was a possibility that another leg downward can arise across the crypto market in the coming weeks. Binance Coin was likely to follow the trend of Bitcoin. The bullish order mentioned in a recent article block did not hold up.

The bullish order block was broken after repeated retests

The more often a support level (or area) gets retested, the weaker it gets. This was proved true in recent days for Binance Coin. On 19 September, BNB formed a bullish order block on the 12-hour timeframe. This candle was also in close proximity to the significant level at $256. Moreover, it had confluence with the range lows for Binance Coin, a range that it has traded within since late August.

The Relative Strength Index (RSI) sunk beneath the neutral 50 level when BNB retraced all its gains to drop from $360 to $280. However, even though the On-Balance Volume (OBV) took a hit, it was near a zone of support which acted as resistance in October. Further dips on the OBV would be an added sign that sellers were here to stay.

Apart from the technical indicators, the price action itself has been strongly bearish recently. Despite the short-lived pump to $398 earlier this month, the selling pressure that began near the $360 mark flipped the structure to bearish. Neither the $300 zone nor the $260 area was able to halt the march of the bears.

In the next week or two, the former bullish order block will likely be retested as a bearish breaker. Hence, it can offer shorting opportunities targeting $240 and $216 for ambitious short sellers. A move back above $270 would suggest that bulls were putting up a fight, and could present lower timeframe traders with a bullish bias.

Mean coin age in an uptrend to show accumulation

The mean coin age metric saw a sharp decline in early October, but has been in a steady uptrend since then. This meant that fewer coins moved from their current addresses and can be indicative of an accumulation phase. However, this metric by itself does not indicate local tops and bottoms well. Rather, it was something to keep an eye on.

Similarly, the 30-day active address count has been falling since May. It formed a bottom in mid-October, and has slowly crept upward since. Once again, it might not give actionable information for traders but rather is something investors can keep an eye on. The dormant circulation (90-day) metric did not see a sharp spike in the recent weeks of heightened volatility, which suggested that holders from the past 90 days might not have panicked despite the falling prices.