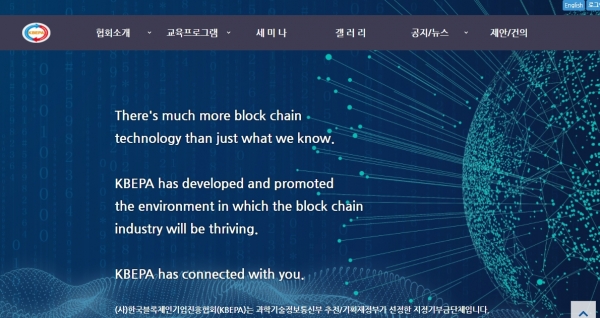 [Blockchain Today Reporter Han Ji-hye] G) Korea Blockchain Enterprise Promotion Association (Chairman Han-young Lee) is a medium-sized exchange other than the four existing exchanges, including Upbit and Bithumb, for the issuance of real name verification accounts of banks, a key requirement for reporting on virtual asset exchanges such as the National Assembly. It announced on the 6th that it is discussing ways to open it to the public as well.

The association needs to review the exchanges that are in operation and establish systems that comply with special laws such as △ Information Protection Management System (ISMS) certification, money laundering prevention (AML), etc. △ Investor protection exchanges such as a certain level of dark coin exchange. It is proposing an alternative, and it is confirmed that there are about 20 ISMS-certified exchanges, including Coredax and Poblegate.

Unlike the stock market, the association’s practice of increasing the investor burden by imposing excessive costs on the existing four exchanges, such as △transaction and transmission fees, and registration fees, in the case of virtual assets, is also due to the monopoly of the existing four exchanges, which secured 93% of the market. As such, it suggests strengthening the competitiveness of the exchange by expanding the issuance of real-name accounts by banks and △ normalizing the distorted market △ protecting investors △ improving services through the market competition system.

In addition, many experts are concerned that’real-name accounts can be reissued only to the existing four exchanges that have already been issued and operated’.If this happens, the Constitution guarantees equal rights and the Fair Trade Act that regulates monopoly. It also emphasizes the potential for violations of the back.

Kim Hyung-joong, a special professor at Korea University (Chairman of the Association’s Advisory Committee), said,’Considering that Japan has already granted 23 exchanges since 2017, Korea also reports and repairs exchanges that meet certain requirements, while holding the exchanges responsible for preventing money laundering. We also have to consider how to do it.’

Chairman Lee Han-young also said, “Considerable consultations with the National Assembly are already underway to include medium-sized exchanges with certain requirements such as ISMS establishment in the subject of issuing real-name bank accounts under the Special Fund Act,” and “normalize the distorted virtual asset market and secure competitiveness. At the level, he emphasized that we will continue to discuss so that the issuance of real-name accounts of banks in mid-sized exchanges can be implemented.

In the banking sector, based on the’Reference Materials (Guideline) for Issuing Real Name Confirmed Deposit and Withdrawal Accounts’ prepared by the Bank Federation at the end of last month, it is expected to finalize its own guidelines during this month and begin reviewing the virtual asset exchange.

Meanwhile, in order to protect investors from the craze for investment in virtual assets such as 2030 and 5060 classes with member exchanges, the association △Strict listing standards and standardization measures such as designating and delisting significant listed stocks △Scam, game bull and anonymous virtual asset management Plan △Management and expulsion of defective virtual asset issuers involved in similar reception and multi-stage, etc. △We are also reviewing the expulsion plan of defective foundations through periodic disclosure checks.

G) The Korea Blockchain Enterprise Promotion Association was launched with approval from the Ministry of Science and Technology in November 2018, and since then, it has held a specialized policy forum for the creation and development of the blockchain enterprise ecosystem, which is a technology based on the 4th industrial revolution, policy recommendations for the government and political circles, and specialized training. Programs such as process operation, awards for blockchain awards, and public relations are being promoted.

Asia Blockchain Community Interviews DKYC “KYC is not for me. I want to be financially free.”