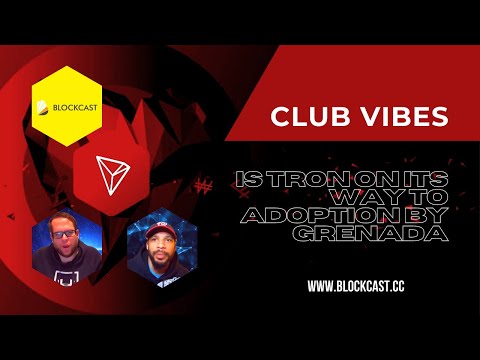 Club Vibes Episode 3 talks about Tron and their move into Grenada.

Has the community of Tron not listened closely to their ex-leader Justin Tron when he decided to exit in favor of the DAO. There has been a lot of speculation as of late if Justin did in fact abandon the project and leave the community to suffer. He removed four nodes to make the system a fully decentralized autonomous organization. Smart on his part to separate himself further away from the ecosystem.

There are simple facts though that stand out that say he is still not anywhere close to giving up on Tron. One for instance is some of his closing statements on leaving, almost pushing the community to continue on and he is watching. When you move into a government position you do have to realize that you can’t have conflicting interests when pushing something into place.
It would be detrimental and cause major issues to the position that he holds.

Now working for the island of Grenada he took on a position of being part of the World Trade Organization. Impressive on his part to be able to push decentralization to such a large organization and get worldwide adoption. He did also mention that a decentralized financial system would be amazing in developing countries. This in fact points to the countries he is currently working around.

There is a recent development of the country of Belize starting a stable coin for Central American countries. Another perfect example of giving the ability for places such as Grenada to easily get into cryptocurrency and be totally decentralized. There will be further developments as we continue to pursue this story, stay tuned for more great stories in the future.

Scott Tripp AKA Cryptobeast32 and Vibin, bringing you all the hottest and soon-to-be trending topics!

Blockcast.cc is a broadcasting news source for the blockchain community. Founded in Singapore. We have a network of partners in China, Hong Kong, South Korea, Singapore and Malaysia. We have also helped global blockchain and cryptocurrency companies reach their marketing and public relations goals.