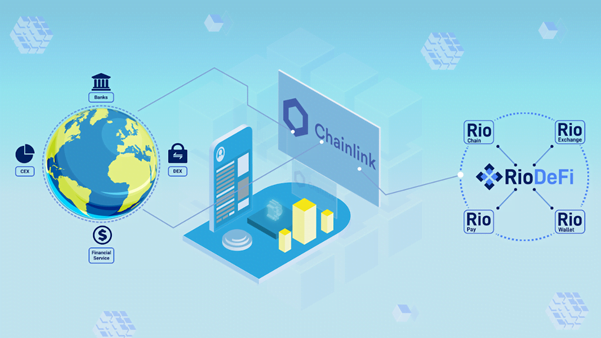 The crypto world’s leading oracle solution is integrating with its leading interoperability blockchain. RioDeFi, the decentralized finance blockchain connected to Polkadot, has revealed that Chainlink’s price oracles are to provide market data across its network. The deal means that projects building on RioDeFi, including MANTRA DAO, will be able to access decentralized and tamper-proof price feeds.

The integration of Chainlink oracles is increasingly seen as evidence of a blockchain’s maturity; a rite of passage that all fledgling networks must pass in order to be taken seriously. RioDeFi hasn’t partnered with Chainlink to tick off another item on its roadmap or to flex, it should be noted: there are more practical considerations at play.

Oracles are at the heart of intelligent crypto network design. They provide a means of querying data for actions that occur offchain, be that on another crypto network or in the real world. Chainlink is synonymous with this service, and its decentralized oracles are used by more crypto projects than any other.

Its most popular product is its Price Feeds, which will be integrated into the entire RioDeFi ecosystem including its mobile wallet, exchange, and payment dApp. Oracles must perform a critical role, relaying rapidly-changing price information, such as the price of BTC/USD, quickly and accurately. Crucially, this information must be tamper-resistant to prevent exploitation by malevolent actors. False pricing can enable sophisticated attackers to profit from arbitrage, often using flash loans to acquire the capital necessary to implement the exploit.

“The ability to provide data from the outside world into smart contracts in a trustless manner is becoming a bedrock for the blockchain industry and defi,” said RioDeFi CEO James Anderson. “We are delighted to integrate Chainlink to provide our developers with secure and reliable price data with strong market coverage, ultimately enabling the creation of a whole suite of financial applications that can be trusted to trigger the movement of large amounts of onchain value.”

Although the partnership is a bigger deal for RioDeFi than it is for Chainlink, it is an arrangement that will work to the advantage of both parties, giving the latter greater exposure to Polkadot and its interoperable series of parachains. The benefits RioDeFi will gain from accessing Chainlink’s price feeds were succinctly explained by Daniel Kochis, Head of Chainlink Business Development: “By using time-tested oracle networks already in production, RioDeFi’s ecosystem can focus on building next-generation defi dApps without having to spend time and resources, as well as take on the additional risk of provisioning their own oracle infrastructure or using unproven alternatives.”

Initially, Chainlink’s price feeds will be put to use in the suite of dApps that RioDeFi has created itself: RioPay, RioWallet, and RioExchange. With third party developers being encouraged to build on RioDeFi, however, the number of dApps is only set to grow. At first, the main use case for Chainlink’s oracles will be for trading purposes, such as obtaining pricing information when swapping tokens using a DEX or AMM. There are plans afoot, however, for gaming applications to be developed on RioDeFi, where the ability to query a reliable oracle solution will prove valuable.

Other use cases, both for RioDeFi and for Chainlink’s oracles, include prediction markets, a route that Matic Network is currently pursuing with the help of Chainlink. As the RioDeFi ecosystem expands, it is expected that further Chainlink products will be integrated, providing a reliable mechanism for obtaining data from an array of real-world and onchain events.