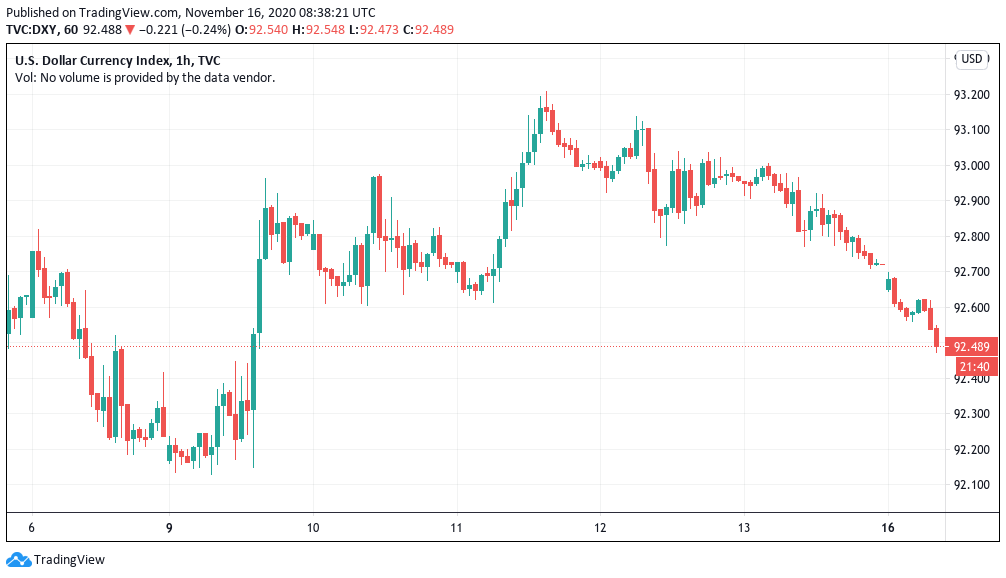 Bitcoin (BTC) begins a new week with stocks rising and the U.S. dollar falling — all while trading back above $16,000. What’s next for price action?

Cointelegraph takes a look at the factors which could shape how Bitcoin moves in the coming days.

This week’s macro environment feels somewhat different to the last — stocks are gaining, boosted by a major Asian trade deal, while the U.S. dollar is losing ground.

According to the latest data on Nov. 16, the U.S. dollar currency index (DXY) has declined over the past week to hit 92.58 from post-election highs of 93.2. Traditionally, Bitcoin moves inversely with DXY, and despite this relationship becoming less pronounced recently, heavy moves in either direction can still impact BTC/USD.

Asian stocks meanwhile led the way on Monday, with 15 nations signing the long-awaited Regional Comprehensive Economic Partnership (RCEP), set to reduce trade tariffs by up to 92% between them.

The mood spilled over to European and U.S. futures, with markets now on track to hit record highs across the board. The situation is curiously familiar — after the crash and subsequent rebound earlier this year, markets are once again buoyant despite the tightening noose of coronavirus restrictions worldwide.

As Cointelegraph previously reported, artificial meddling from central banks remains a major cause for reservations about the true health of equities.

“No view on covid, only on people’s response to it. Mkts will be well supported with #GOLD and #Bitcoin continuing to benefit.”

Bitcoin’s weekend price action has allowed it to start its third best week in history after sealing a weekly close above the seminal $15,890 area.

For the weekly chart, this means that Bitcoin beat its performance from the previous week to see its third highest weekly close on record Sunday.

Only two more weekly closes have been higher, but analysts continue to debate whether the market will attempt to revisit them.

“The market in general is at crossroads of direction,” Cointelegraph Markets analyst Michaël van de Poppe summarized late Sunday, when BTC/USD hovered at around $15,850.

“I do not believe this current push is going to take us to new all-time highs,” he forecast in video analysis earlier in the week.

“I believe a top is coming sometime at the end of November or the second half of November; it may drag until early December.”

Away from retail, institutional investors remain conspicuously long BTC, and according to statistician Willy Woo, capital inflows prove it.

Woo was referring to the decreasing number of coins held on exchange order books, a phenomenon that has marked the recent price gains from $11,000 onwards. Rather than speculate, investors are putting coins into storage elsewhere, indicating a desire to hold for the long term.

Estimates from monitoring resource BTC.com on Monday show that Bitcoin’s mining difficulty is now set to increase by around 4% in the coming hours. The latest automated readjustment for difficulty, estimates previously forecast a drop of approximately 6%, but subsequently reversed direction.

The increased competition among miners follows a sharp decline in difficulty two weeks ago, which at 16% was Bitcoin’s biggest drop since 2011.

Zooming out, analysts have been keen to note that difficulty is arguably Bitcoin’s most important technical characteristic. Adjustments on long-term timeframes, combined with block subsidy halvings every four years, have consistently protected the network completely independent of external help.

“The difficulty adjustment ensures that only so much flow can be dropped into the market every day. What that means for the price is interesting because it helps calm the urge to front-run the future halving events,” Preston Pysh, co-founder of The Investor’s Podcast Network, wrote in a now-popular Twitter thread published last week.

Data further shows that hash rate — an estimate of how much computing power is dedicated to validating the Bitcoin blockchain — is returning to growth after its own drop.

How much extreme greed is possible?

The latest readings from the Crypto Fear & Greed Index suggest that a correction is all but guaranteed for BTC/USD.

Fear & Greed uses a basket of factors to gauge the mood among BTC investors, and with a score of 90/100, it lies firmly in the “extreme greed” zone.

For context, only at the height of last year’s bull run did the Index beat its current highs. As Cointelegraph reported, however, analysts argue that 2020 has produced much more “organic” and, therefore, sustainable growth for Bitcoin price.