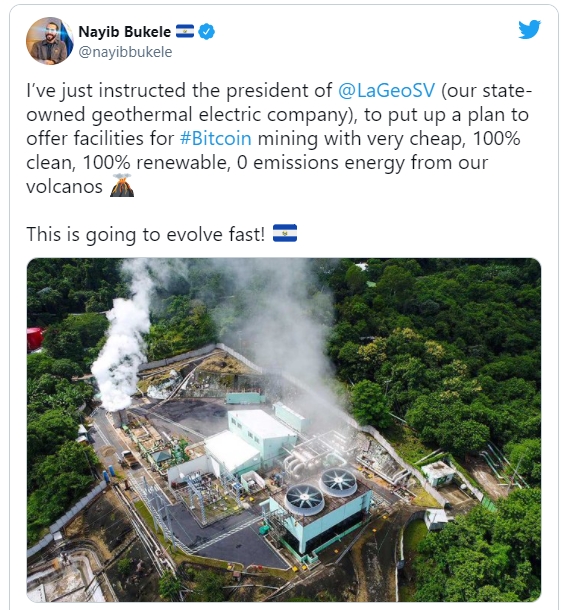 As Cointelegraph reported on the 10th (local time), President Bukele tweeted: “I have instructed the state-owned geothermal power company to develop a plan to provide facilities for Bitcoin mining.” It is “very cheap, 100% clean and 100% renewable.” Mining using our volcanic energy, which is possible and has zero carbon emissions,” he explained.

LaGeo, the state-owned electricity company mentioned by President Bukele, operates the only geothermal power plant in El Salvador based in regions of Ahuacapan and Berlin, and has plans to build new facilities in San Vicente and Chinameca. announced.

The capacity of geothermal power plants accounts for more than half of the country’s energy from renewable sources. In El Salvador, 23 active volcanoes can generate more than 200 MW. According to one report, El Salvador’s geothermal power potential is close to 644 MW. In other words, LaGeo is currently using about 31% of the available power generation. According to data from the Cambridge Bitcoin Electricity Consumption Index, Bitcoin uses more than 116.7 TW of electricity per year.

The mining solution is on the list of pro-crypto actions taken by Bukele over the past few days. At the Bitcoin 2021 conference in Miami last weekend, the President of El Salvador told attendees in a recorded message that he would submit a bill to use Bitcoin for legal tendering. This bill was passed by a majority vote in the National Legislative Council.