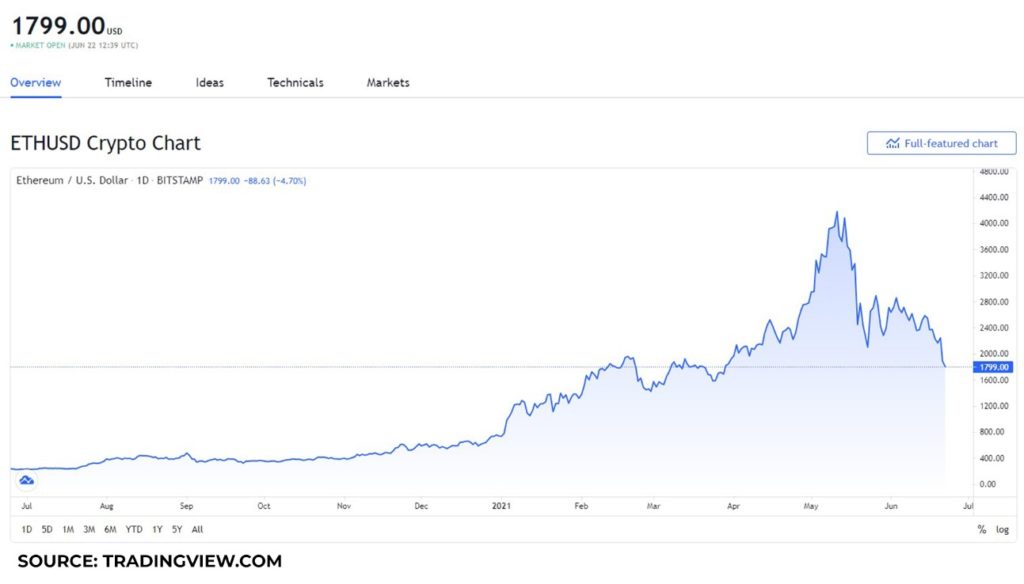 China broadened its crackdown on the massive cryptocurrency mining industry by banning mines in a key southwest province known as Sichuan, where they ordered the closure of 26 mines. This is impactful due to the fact that Chinese miners actually power around 70% of the global trade in cryptocurrencies.

Ethereum offers a land of opportunities

Ethereum has played a major role in DeFi, where many decentralized applications (dApps) have taken advantage of its smart contract functionality.

This is done in an attempt to provide improved transaction mechanisms that tackle scaling, security and as of recently, have brought forward the popularity of yield farming.

As such, dApp offerings have diversified when it comes to their use-cases. The Ethereum blockchain has seen tremendous activity as a result, with a total of 159,793,975 distinct addresses, with a daily increase of 131,896 as of June 21.

In other words, Ethereum is more than just a blockchain with its native cryptocurrency Ether that you can invest in.

Ethereum is an entire ecosystem, which is almost impossible to fail or drop to $0 in the long term. This makes it a worthwhile investment at any point in time, and more than ever as of now given the fact that it has dropped to a $1.800 value.

Should you buy Ethereum now?

This prowess Ethereum has over the cryptocurrency industry as a whole will highly likely allow it to kick back in value by the end of 2021, potentially getting it over the $2,000 mark with ease.

At $1,799, Ethereum might be a worthwhile investment if you plan on holding it until the end of 2021 and beyond.

Historically, it has always found a way to kick back up in value, mostly due to the fact that it is the go-to blockchain for many dApp developers.

This is due to the fact that many dApps have kicked up in use-cases and value, increasing the appeal, popularity, and value of Ethereum in the process.

Preview of next week | South Korea’s “most stringent supervision” landed, and the 11th round of Gitcoin is coming to an end

Ethereum traders must look out for this throwback spurring a hike