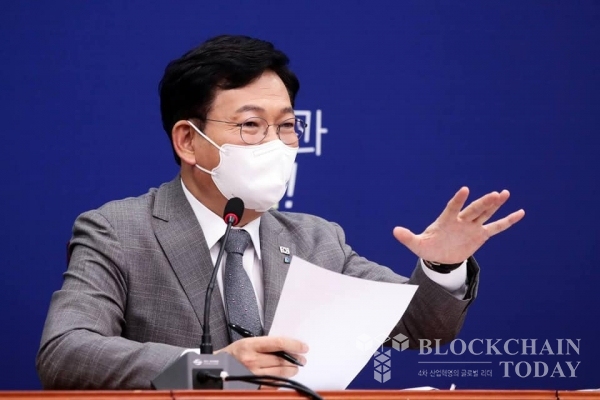 [Blockchain Today Correspondent Han Ji-hye] In addition, Song Young-gil, party leader of the Democratic Party of Korea, emphasized the introduction of independent blockchain technology as a field that will feed the future of Korea at a press conference held in Busan on the 18th.

This is an indication of the view that the virtual asset (virtual currency) craze, which is currently spreading even as a social phenomenon, will be converted from regulation to promotion, and through this, will expand into competition for hegemony in the future digital key currency.

On this day, CEO Song said, “In the metaverse era, the importance of blockchain technology and NFT will grow, and as the global digital currency hegemony is accelerating, we will establish a government agency dedicated to blockchain (Blockchain Administration) in Busan so that the Republic of Korea does not fall behind. We need to prepare for the future by properly activating the blockchain special economic zone.”

◇Digital key currency hegemony
Busan was designated as a block chain regulation-free special zone in 2019 and is expected to attract 250 related companies, create 1,000 jobs, and generate KRW 85.9 billion in production inducement effect, but it did not produce specific results in attracting companies, starting a business, or creating jobs. The reason is that the government is negative about virtual asset exchanges, so there is a contradiction between suppressing virtual assets and fostering blockchain technology. According to the opinion of experts, virtual assets and the development of the blockchain technology industry are two sides of the same coin, and it is not easy to separate them.

This is to promote the virtual asset (virtual currency) craze, which is currently spreading to a social phenomenon, from regulation to Jinheung, and through this, expand into competition for hegemony in the digital key currency of the future. China developed CBDC (central bank digital currency) six years ago and is preparing to use it for the Winter Olympics next year. The Bank of Korea has also been preparing a CBDC for two years. In the United States, after the 2008 financial crisis, due to distrust in the institutional financial sector, Bitcoin was created in 2009 and the digital currency market is rapidly developing. The United States is working to institutionalize this through related legislation.

My future perception is to elevate the Republic of Korea as a partner or well-intentioned competitor in the US competition for hegemony in the future digital key currency that appears in the rapidly changing global phenomenon represented by the term ‘metaverse’. It is necessary to preempt the bus market at the national level and protect the sovereignty of the Republic of Korea in the coming digital currency war.

Terms such as blockchain and metaverse are currently in the process of slowly spreading to the public. It is as if the Internet was an unfamiliar concept among the people in the 80s. If you do not challenge yourself that the future is uncertain, you will fall behind. Considering the examples of national wealth creation that Korea achieved through leading investments in Gyeongbu Expressway, Pohang Steel, shipyards, automobiles, semiconductors, and CDMA in the past, now is the time to make strategic investments for the future.

Through leading investments over the past decades, Korea has become one of the world’s top IT infrastructure powerhouses, and on this basis, it has become a major export industry for IT-related products and digital home appliances. Although the world today is a huge consumer market for Chinese products, which is a major producer, in the future metaverse environment, the United States with Netflix, Hollywood, Disney, Blizzard, etc. It will be a huge consumer market.

In the late Joseon Dynasty, the Geumnanjeon system was implemented, which allowed only yukuijeon and prohibited melee battles, but was unsuccessful. Now is such a situation. The new digital asset and virtual asset market cannot be neglected. In the metaverse world that is just around the corner, payment through virtual assets will become the mainstream instead of the existing key currency. In preparation for this global trend, the United States has prepared or brought in influential virtual assets such as Bitcoin, Ethereum, EOS, and Ripple. We should no longer deny the existence of virtual assets or view them only as the subject of sanctions, but must achieve a major paradigm shift from regulation to promotion.

Through this paradigm shift, if we can find a breakthrough through blockchain technology to solve the real estate problem, one of the axes of social inequality in Korea, and have Korea’s own creative next-generation blockchain payment network, we can have a world-class digital financial infrastructure. will be.

Based on this, I believe that we will be able to confidently jump into the competition for digital key currency hegemony in the metaverse world in the future, protect the sovereignty of digital currency, and become the G2 following the United States in the block chain market.

However, such a grand vision will never be achieved easily, and many obstacles and opposition will have to be overcome through social consensus. We must not forget that the success stories of the Gyeongbu Expressway, Pohang Iron and Steel, shipyards, automobiles, semiconductors, and CDMA were achieved amidst numerous challenges and failures. Success built on failure has led to the growth of the Republic of Korea, making the Republic of Korea on the ranks of advanced countries.

Even if there is opposition and technical difficulties in front of you, you cannot back down from the competition for digital supremacy in the future. Instead, it is necessary to blitzfully push ahead with the task of developing future new technologies such as the blockchain OS and blockchain browser. In addition, the responsibility should be transferred to the Ministry of Science, Technology and Information and Communication to materialize this vision in earnest.

In the information and communication industry right now, it is said that an important decision must be made right now. Will you follow up as a latecomer in 5 years or so? Or will you make a leading policy decision from now on? Although we live in a small country, we must refer to the voices of the industry that the future of Korea lies in leading the competition for hegemony in a vast digital territory.