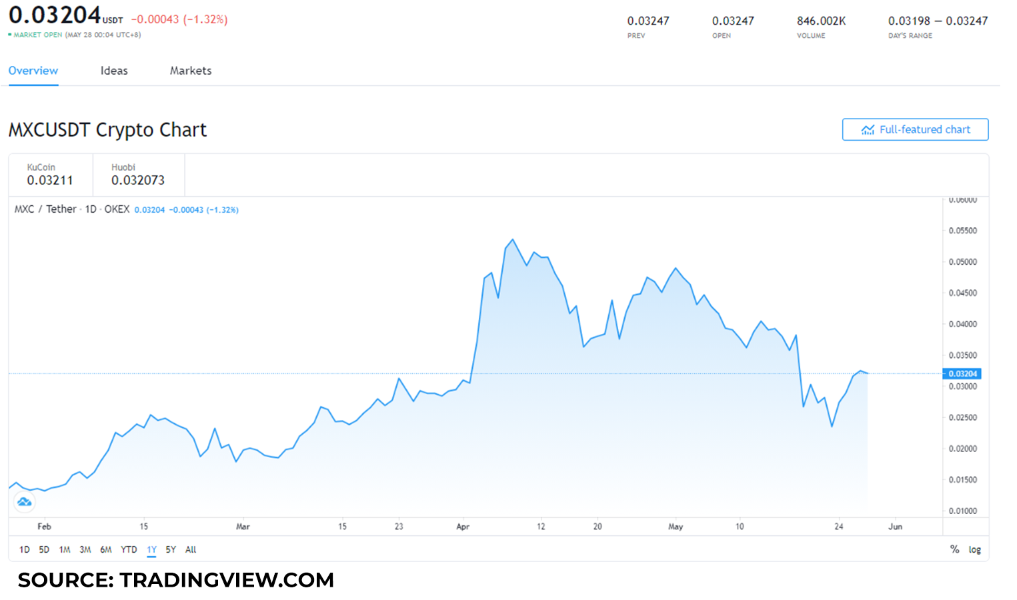 The Internet of Things (IoT) was originally dedicated to making phones, fitness trackers, humidity sensors, and generally all forms of technology we love a lot more useful. Over time though, it has developed to a point where it can elevate even the most boring products to a whole new level.

The future of IoT is more promising than ever, and there are projects within the cryptocurrency universe that will elevate the market even further. MXC, IoTeX, and Ruff are three of the top cryptocurrencies to buy within the IoT sector.

Should you buy MXC?

MXC is a utility token referred to as an IoT Token, where MXC is building a global data network that allows wireless devices to connect and communicate efficiently over longer distances when compared to Wi-Fi or Bluetooth.

MXC was seen trading at $0.0321 on Thursday which is roughly 35% lower than where it traded at one month ago. However, looking further back to March 27, MXC was $0.0288. This means that despite the month-over-month decline, MXC is higher by around 11% over a longer timeframe.

As the IoT world revolutionizes, we can potentially see it go above and beyond the $0.0500 mark. If you can buy MXC at or below $0.0320, it might be a solid purchase. But if MXC falls under $0.0280 it might be a sign to stay clear as it signals buyers had little interest at the $0.03 level and are likely waiting for a much lower entry point.

Should you buy IoTeX?

IoTeX IOTX/USD is considered to be the IoT-focused blockchain platform of the future with a high level of scalability, privacy, and developability.

This is a coin that has the potential to reach a higher value the moment more IoT devices start implementing blockchain technology, and as such, if you can get it at $0.0330, it could be a solid, long-term investment. But exercise some caution at key levels like $0.03 as a dip below signals potential support levels failed to hold.

Should you buy Helium?

Helium HNT/USD is a decentralized, blockchain-powered network intended for IoT devices, and it allows low-powered devices to communicate with each other and send data across the network.

Helium was trading near $17 on Thursday and is up more than 20% for the day and significantly higher after entering 2021 at around $1.30.

While Helium is up big since the start of the year, it should still be bought by investors amid recent strength and part of a momentum trade. If you want to wait for a lower price point, we would recommend buying at $15 and setting a stop-loss at $14 to best manage risk and downside exposure.

Buy your crypto in minutes with our preferred broker, eToro